iPhone 6, iPhone 6 Plus and Apple Watch: In Pictures

It has been an absolute pleasure live-blogging this event. Thanks a lot for reading this live blog. NDTV Gadgets readers are awesome. We're signing off. Thanks again and goodbye!

Tim Cook waves goodbye to the crowd. That's that. The event is now over.

Apple is wrapping up the event. Tim Cook just thanked all Apple employees.

U2 just finished their performance. They've announced that their new album will be available for free to all iTunes users.

While U2 performs on stage, you can quickly read our breaking news coverage. As always, NDTV Gadgets is the first to cover breaking technology news.Apple Watch Unveiled as 'Comprehensive Health and Fitness Companion' Apple Unveils 'Apple Pay' Mobile Wallet and Payment SystemiPhone 6 Plus Launch Event Live Video Stream Is a Massive Apple Fail

Cook on the Apple Watch: It will redefine what people expect from a watch.

Time for some music. The band U2 is performing live at the Apple event.

We've published all the latest news on this Apple event. You can find it here.

Apple Watch will be available in early 2015.

Cook says, Apple Watch is going to change the way we look at fitness.

The Apple Watch has an app for workouts, that tracks calories burned as well.

Now they're showing a video to highlight the fitness tracking capabilities of the Apple Watch.

Cook says the Apple Watch can motivate people to be healthier.

Tim Cook is back on stage. He says, It's amazing what you can do from your wrist.

Apple Watch Digital Touch app has its own physical button. tap thumbnails of contacts to message or send tap codes

Turn-by-turn navigation is supported on the Apple Watch. As is obvious, you also get directions and estimated time of arrival.

The digital crown is being used to zoom. You can use that on the Maps app and the Photos app.

All the Siri features are available on the Apple Watch. If you are in the US, you can pull movie information from Rotten Tomatoes. We're not sure if all of these are going to be available in India.

You can also talk to the Apple Watch and have Siri send a reply to text messages.

You can swipe up from the bottom of the watch face to get quick glances. You basically can see information such as calendar entries and stock information. These glances are customisable.

The interface on the Apple Watch is very different. You can turn the digital crown to zoom into the list of apps. The press feature appears to be similar to a right-click.

To use the Apple Watch, you're going to need an iPhone.

The image on stage shows different straps and casings. The straps and finishes are quite varied.

The Apple Watch is available in three finishes and has six different strap choices.

There are two sizes of Apple Watch!

Apple has made six different kind of watch straps for the Apple Watch.

The Apple Watch has a wireless charger. It attaches itself to the base of the watch.

It uses the GPS on a linked iPhone.

The Apple Watch can read your heart rate.

Apple says the touchscreen is pressure-sensitive. There's a difference between a tap and a press, they say.

The Apple Watch has a sapphire screen.

The Apple Watch has a touchscreen. That wasn't clear to us until now.

The digital crown is the primary controller for the Apple Watch. Turning it can do things like zoom in and out on the Maps app.

This watch has a dial on one side. Tim Cook says it is called the digital crown.

Lots of close-up photos of the Apple Watch being shown. Several tiny icons of iOS apps can be seen.

It is a comprehensive health and fitness device, Cook says.

The video shows watches with various kinds of straps.

This new product is definitely a watch.

They're showing a video now...

Now we have the famous One more thing slide.

In the meantime, we have a quick iOS 8 update for you. The new OS will be available on September 17.

Some of the more popular retailers include McDonald's and Subway.

They're talking up the privacy features of Apple Pay. Apple doesn't know what you bought, where you bought it or how much you paid for it.

If you lose your iPhone, you can disable payments via Find My iPhone

You can take a photo of a credit card and add it to your iPhone, Apple says.

It uses Touch ID (fingerprint scanner) for authentication of payments.

Apple is now talking about payments. They say the existing methods of paying via credit card are outdated.

The iPhone 5s 16GB will be available for $99 with a two-year contract.

The iPhone 5c 8GB will be available for free with a two-year contract.

Note that all of the prices are with two-year contracts, so applicable to the US only.

Now the most important update - the price.

Schiller quickly rushed through all the iOS 8 features, such as voice notes via iMessage.

Now they've moved to iOS 8. There are several improvements to the OS.

Schiller is talking up the front camera on the new iPhones. They let in 81% more light, according to Apple.

iPhone 6 Plus has optical image stabilisation.

The Panorama mode now supports photos up to 43 megapixels.

They're showing some sample shots, all taken with the new iPhones' cameras.

One of the new camera features is advanced noise reduction.

The new phones have an 8-MP camera with a next-generation iSight sensor.

Schiller says the iPhone 6 and 6 Plus support 20 LTE bands.

These phones have a new sensor - a barometer. The phones can now measure elevation as well.

The new iPhones have a motion co-processor - M8.

iPhone 6 Plus has 24 hours of 3G talktime, iPhone 6 lasts 14 hours, according to Schiller.

Schiller says the iPhone 6 and 6 Plus have equal or better battery life when compared to iPhone 5s.

Phil Schiller is back on stage.

The graphics appear to be console-level.

They are showing a demo of a game that was built to make the most of the A8 chip. The game is called Vain Glory by Super Evil Megacorp studio.

Apple is talking up Metal, its new engine for games. This was announced at WWDC in June.

Schiller says the new iPhone is geared for sustained performance, meaning it can perform at full power without heating up too much.

Schiller is now talking about the new Apple chip.

The power button is on the side.

The iPhone 6 Plus has two display modes - horizontal and vertical. Apps will simply be scaled up to fit the screen size.

The iPhone 6 Plus is the bigger model, as is apparent.

It is going to be called iPhone 6 and the iPhone 6 Plus.

CONFIRMED: There are two new iPhones.

They're showing the new iPhone. The leaks weren't too far off the mark it seems.

And the event has begun with a promotional video.

The venue is almost full. The event will start at any moment now.

The event is about to start. Stay with us for live updates.

The crowd is entering the Flint Center for the Performing Arts in Cupertino, California, which is the venue for today's Apple event.

Apple sent invitations for the September 9 event at the end of August with its typical cryptic style, saying, “Wish we could say more.”

Apple is all set to launch its next generation iPhone, and its long-rumoured iWatch wearable, at the Flint Center for the Performing Arts in Cupertino, California.

Hello everyone, welcome to NDTV Gadgets' live blog for Apple's iPhone event. The launch starts at 10.30 pm. Stay with us for live updates.

One of the biggest days of the personal technology year is upon us - Apple is all set to launch its next generation iPhone, and its long-rumoured iWatch wearable, at the Flint Center for the Performing Arts in Cupertino, California. The event begins at 10:30pm IST.

Apple sent invitations for the September 9 event at the end of August with its typical cryptic style, saying, "Wish we could say more." Of course, while not much has been revealed officially, innumerable leaks and reports over the past few months have provided what appears to be a clear picture of Apple's launches.

First up, is the next-generation iPhone - which should bear the name iPhone 6 if Apple's iterative naming scheme is anything to go by. The industry has been abuzz with expectations for two iPhone devices being launched at Tuesday's event, with different screen sizes - 4.7-inch and 5.5-inch.

The company has been facing much criticism from both users and the industry about the small size of its smartphone displays, with the last generation iPhone 5s and 5c sporting 4-inch displays - considered miniscule when compared to the flagship offerings from other manufacturers. The trend is one of converged devices, sufficient to even affect tablet sales according to market analysts.

Apple's much-rumoured wearable device, a smartwatch, is expected to be called the iWatch, with the name trademarked by the company in several nations. Apart from powering at-a-glance convenience, the iWatch is also said to bring in health and fitness functionality, and enable a mobile payments and wallet system.

Stay tuned, as we bring you live updates from Apple's Cupertino event. 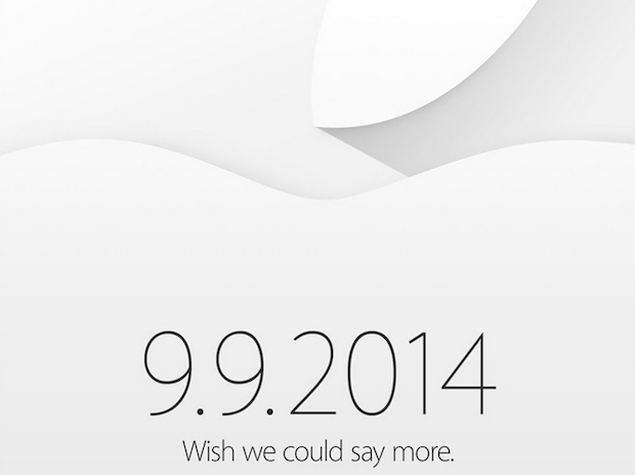