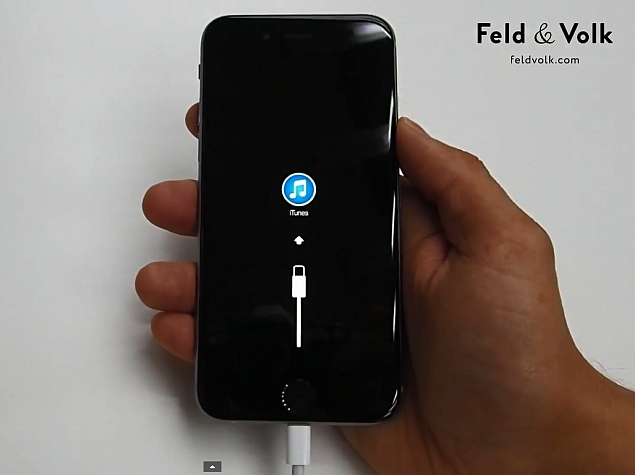 The iPhone 6 leaks just don't seem to stop even after the Cupertino firm's official invitation for the September 9 event. While we have already seen all possible kinds of leaks for the device before, now a video shows what is claimed to be a fully functional 4.7-inch iPhone 6 device - however, evidence has been put forth pointing to discrepancies that indicate the leaked device is not Apple-made, but has actually been put together with leaked parts.

The video by Feld & Volk, maker of premium Apple cases and accessories, shows what's purported to be a functional 4.7-inch iPhone 6 in Silver colour that has been connected to an iMac, and displays the 'Connect to iTunes' screen once booted up. The user is not able to get past the particular screen as the iMac shows an error stating, "iTunes could not contact the iPhone software update server because you are not connected to the internet." The video later shows both the alleged 4.7-inch iPhone 6 unit and an iPhone 5s kept side-by-side showing the same 'Connect to iTunes' screen.

9to5 Mac has pointed out the alleged iPhone 6 device is not Apple-made, and has probably been put together from leaked parts, as there are several inconsistencies - including the fact the device is running iOS 7 and not iOS 8 as the next iPhone should.

The website notes the colour of the iTunes logo shown on the device's 'Connect to iTunes' screen in the video is blue and white, which is the colour of the logo on that particular screen on iOS 7. Of course, the iPhone 6 should ship with iOS 8, where the iTunes logo on the 'Connect to iTunes' screen is orange and white. Also noted, was that a gear icon appears on the smartphone's screen before showing the 'Connect to iTunes' screen when paired with the iMac - something that official iOS 7 devices will not show when booting up. Finally, as the report points out, the logo appears on the screen much higher than where the display starts above the home button, pointing to software (iOS 7) geared for a smaller/ lower resolution iPhone display.

So, while the alleged 4.7-inch iPhone 6 in the video is definitely not an Apple-made device, it is still possible the parts used to assemble it are authentic. The design of the device in the video is in-line with previous leaks, with the inclusion of curved edges and elongated buttons on the sides instead of straight edges and round buttons as seen on iPhone devices until now. Also seen is the power button and SIM card slot on the right.

Feld & Volk, which has contributed several iPhone leaks in the recent past, does appear to have access to some parts from the Apple supply chain - as the company recently also posted images of the alleged 4.7-inch iPhone 6 logic board. These images, as noted by MacRumors, point to several interesting components, such as the Apple A8 processor, 1GB of Hynix-built RAM a Qualcomm MDM9625 LTE modem, and an NFC chip from NXP.

The inclusion of 1GB of RAM as well as NFC is in-line with numerous previous leaks.

All will become clear in little over a week, when Apple unveils the iPhone 6 as expected on September 9. Of course, in the intervening period, we may still see more leaks - something those eagerly awaiting the new iPhone will certainly be interested in. Stay tuned.

China's Alibaba Plans IPO for Week of September 8: Report
As Email Turns 32, Indian-American Reaffirms His Claim as the Teen Creator