iPhone 6 and iPhone 6 Plus Launch Greeted by Long Queues in Japan, Australia 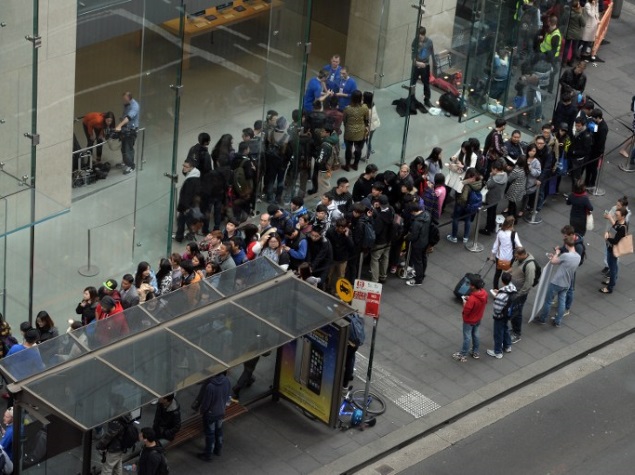 Buyers from China, deprived of the latest iPhone launch at home, were Friday among the first in line in Japan to grab the "6" and its new large-screen cousin as Apple hit back at rivals.

Licensing problems in China meant the global rollout went ahead without the huge and lucrative market, in a blow to Apple which had trumpeted its inclusion in the initial wave of the last iPhone launch.

Outside Tokyo's flagship Apple store in glitzy Ginza, dozens of Chinese were among those waiting in line.

"I'm queuing because it's not sold in China yet," said Chen Manyan, a 21-year-old tourist from Fujian province, adding: "It's expensive, though."

Zou Zhiyang, 29, a Chinese student studying commerce in Tokyo, said he was intending to buy the maximum two handsets allowed.

"I'll buy one for myself, and another to sell to one of my friends in China," he said.

On the eve of the launch, Chinese authorities said Apple had won two necessary approvals, one to certify the phone for the Chinese market and another for wireless devices.

"But iPhone 6 still needs to obtain a key network access licence before it can enter the Chinese mainland market," the Xinhua news agency said.

The delay has led to the emergence of a lucrative secondary market, especially in Hong Kong, where dealers are paying well over the retail price for new iPhones in the expectation of getting even more in turn from mainland Chinese buyers.

That's more than double the price of the top-of-the-range iPhone 6 Plus.

"I have around 200 pre-orders with 60 to 70 percent of these from mainland Chinese customers," Yiu told AFP, adding he had dispatched 10 members of staff to snap up as many handsets as they could.

Yiu said the golden version of the 128GB iPhone 6 Plus was the most sought after model, and that he could resell it for over HK$20,000.

"There will be very little stock for this model, so a lot of people will be going for it," he said.

Special delivery
In Sydney, the first place in the world to get the phone, some buyers had also come a long way.

South Korean Jin-Sik Kim had spent days in front of the store before the doors opened revealing scores of Apple employees in blue T-shirts. 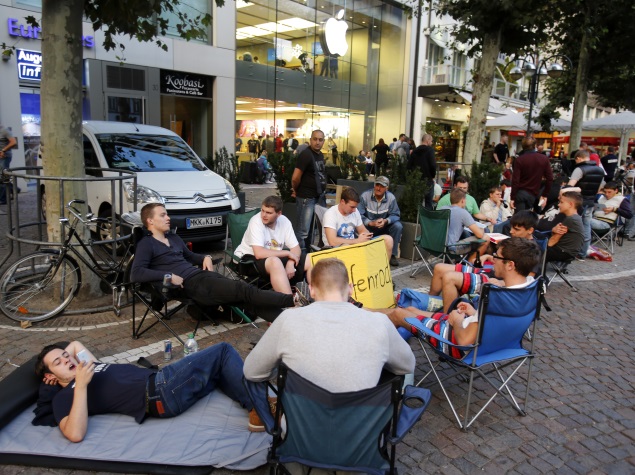 Kim, who had travelled from Seoul, told AFP he had been waiting since Sunday, sleeping out and eating at the nearby McDonald's.

"It's a very unique phone," said Kim who was queueing with six friends and wanting to buy both models. "It's bigger than the previous model."

In Japan, the country's famous customer service ethic was on display when a parcel company managed to deliver a package addressed to the man "At the very front of the line".

"It's not a regular service we'll be offering," said a spokeswoman for Yamato Transport.

Both new iPhones have larger screen sizes in what some see as Apple catching up with the "phablet" trend pioneered by competitors.

The iPhone 6 has a screen of 4.7 inches and the 6 Plus is 5.5 inches, reflecting consumers' growing preference for bigger displays, despite Apple's earlier vow to stick with the traditional size.

Apple's main rival Samsung from South Korea has long had a range of larger handsets, which sell particularly well in Asia, and is due to soon release a new Galaxy Note 4 phablet.

Apple says more than four million pre-orders were received in the 24 hours after the sale of the new iPhones was announced.

Other markets launching on Friday are Singapore, Britain, France, Germany, the United States, Canada and Puerto Rico. Some 20 more countries will get the new iPhone from September 26.