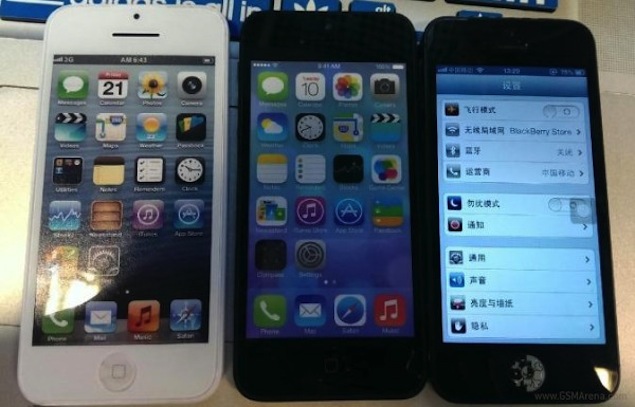 iPhone 5S and iPhone 5C, the next-generation iPhone and the much-rumoured low-cost iPhone respectively, have made yet another appearance in a series of images shared on Chinese micro-blogging site Weibo.

The images, picked up by GSMArena.com via SimOnlyRadar.nl, give an idea of how the two new iPhone models will look compared to the existing iPhone 5. As the site notes, the iPhone 5S (left in the picture above) and iPhone 5C (centre in the picture above) are actually dummy devices, but the image highlights the differences (or lack thereof) in the size and physical appearance of the devices.

In addition to the image posted above, the site has also posted a series of other images that show the new devices from various angles.

There's nothing new to note in terms of the appearance of the phones, with the iPhone 5C sporting a White plastic body and the iPhone 5S bearing a metallic finish similar to the iPhone 5. Looking at the images, there's no way to ascertain the absence of presence of a fingerprint scanner in the iPhone 5S, as has been rumoured.

There's no fresh information in terms of specifications of either phones, to confirm or deny what we've heard earlier.

While there's no official word yet, Apple is expected to unveil the next generation iPhone and a lower-cost iPhone at a special event on September 10. A new report suggests that Apple may begin shipping both iPhones soon thereafter.