In line with our earlier report, Apple has launched the 8GB iPhone 5c in India. The phone will be available at an MRP of Rs. 37,500.

Apple is offering a Rs. 3,000 inaugural discount on the 8GB iPhone 5c, which means the phone will be available at Rs. 34,500 for a limited time. The company is also throwing in a free Apple iPhone 5c case worth Rs. 2,300 with every 8GB iPhone 5c. The duration of this offer is not clear at this point.

Interestingly, the 16GB iPhone 5c is available at Rs. 34,400 as we file this report, so the 8GB variant is unlikely to find any takers at the price point. However, Apple is likely to announce buyback offers with the 8GB variant soon, bringing back price closer to the Rs. 30,000 mark. 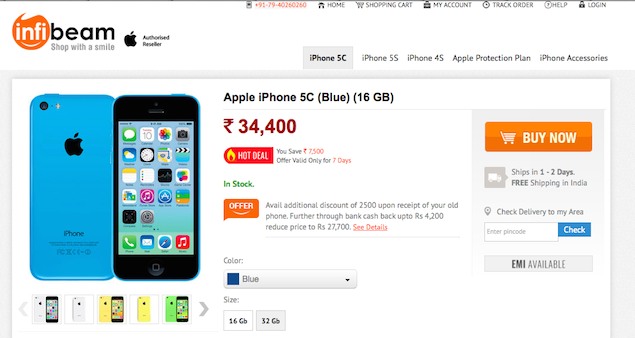 The 8GB variant of the iPhone 5c was officially unveiled back in March, and was initially available in UK, France, Germany, Australia, and China. Recently, the company launched it in additional countries, including Netherlands, Italy, Belgium, Sweden, Poland, Czech Republic, Ireland, Portugal, Austria, Spain, Denmark, Finland, Switzerland, and Norway.

The iPhone 5c was launched in India carrying a price tag of Rs. 41,900 for the 16GB model. The 8GB variant is cheaper than the 16GB iPhone 5c by EUR 50 (Rs. 4,100 approximately), so the India pricing of the variant offers no pleasant surprise to the consumers.

While we are no fans of the 8GB variant, the strategy of offering previous generations iPhone models at lower price points has worked well for Apple India in the recent past, so it's likely that sales of the first 'colourful' iPhone will also get a push if Apple can lower the price point further.

During the last earnings call, Apple CEO Tim Cook highlighted the growth in the India market, which industry insiders have attributed to the various cash backs and exchange offers that Apple has launched in the country.

"iPhone sales grew by strong double-digits year-over-year, and in India and Vietnam sales more than doubled," Cook had said while answering an analyst's query.