Apple is expected to launch its latest iPhone models in September this year, and leaks and rumours continue to pour in from all corners. There has been a lot of speculations about the price, specifications, features, and design of the 2018 iPhone models. An industry analysis has now predicted the specifications and pricing strategies of the upcoming iPhone models. The latest report claims that the market performance of the iPhone 8, iPhone 8 Plus, and iPhone X was "short of high expectations" and it might affect the strategy of the company this year. Additionally, the competition from Chinese brands and their expansion in terms of market shares is also expected to have an impact on how Apple will adjust its price points.

The Cupertino giant is expected to launch three new iPhone models this year - one iPhone X successor with an OLED display, one 6.5-inch most premium variant with an OLED display, and another 6.1-inch LCD variant. As per a market research firm TrendForce, the prices of Apple iPhone models in 2018 may start between $699 (roughly Rs. 49,000) and $999 (roughly Rs. 70,100). The company may launch the 6.1-inch LCD iPhone with a starting price of around $699 to $749 (roughly Rs. 52,600). The affordable iPhone model is expected to feature Face ID support, dual-SIM functionality, 3GB of RAM, and 64GB/ 256GB inbuilt storage variants.

Coming to the upcoming OLED iPhone models, TrendForce predicts that the 5.8-inch variant will be priced starting from around $899 (roughly Rs. 63,100) to $949 (roughly Rs. 66,600). It claims that the iPhone X will see its "end of life" because of a similarity of specifications of the two models. Meanwhile, the 6.5-inch iPhone model is expected to aim for the "premium business segment" with a starting price of $999. 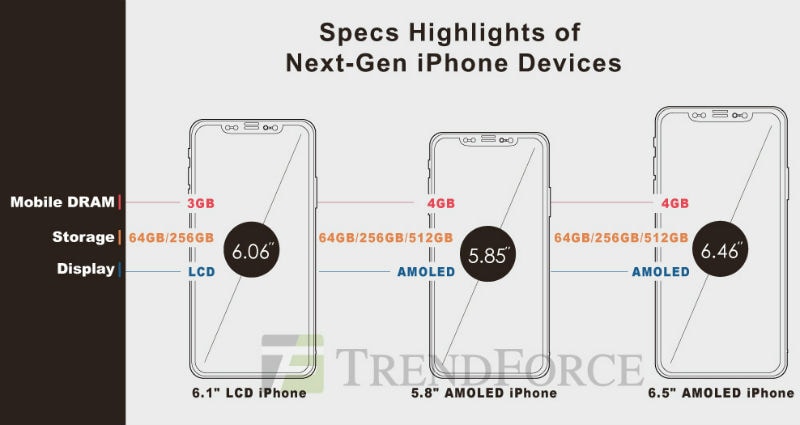 TrendForce cites people familiar with the matter to claim that the two premium iPhone models have already been assembled since late July, while the assembly of the LCD model is scheduled at mid-September. Meanwhile, all three models are expected to be "shipped in September and October as previously scheduled." Notably, there is no official information provided by Apple as of now.