A report claims that the 2018 iPhone variants might be the last to support 3D Touch.

Apple's iPhone 2018 lineup is set to become a reality next month, if past launch events are a yardstick to go by. All rumours point towards three models in the latest generation of Apple's flagship smartphones - an iPhone X successor with a 5.8-inch OLED display, a larger variant with a 6.5-inch OLED panel, and an entry-level 6.1-inch LCD model. A recent investor note by reputed analyst Ming-Chi Kuo suggests that the 6.1-inch LCD iPhone will ship slightly later than the other two. Additionally, he says that Apple Pencil support is unlikely on the iPhone 2018 lineup. Also, another report claims that the 2018 iPhone variants might be the last to support 3D Touch.

TF International Securities' analyst Ming-Chi Kuo, in a note seen by 9To5Mac, stated that all of the three iPhone 2018 variants will be powered by an Apple A12 SoC. The OLED variants will arrive in 4GB RAM and 64GB/ 256GB/ 512GB storage configurations while the cheaper LCD model will get 3GB of RAM and 64GB/ 256GB of onboard storage. In accordance with previous rumours, the 6.5-inch OLED model and the 6.1-inch LCD models are supposed to get single and dual SIM variants depending on the market they are sold in.

Furthermore, the two premium OLED models are expected to get a dual rear camera setup while the LCD variant will have to suffice with a single rear lens. The frame on the OLED iPhone 2018 models will be made of stainless steel compared to aluminium on the LCD one. Lastly, the 5.8-inch model is expected to get a battery capacity between 2,700mAh and 2,800mAh, the 6.5-inch model to get one between 3,300mAh and 3,400mAh, while the LCD variant is said to get a capacity between 2,600mAh and 2,700mAh. The OLED models are slated to get 3 colour options, while the LCD model will get 5. 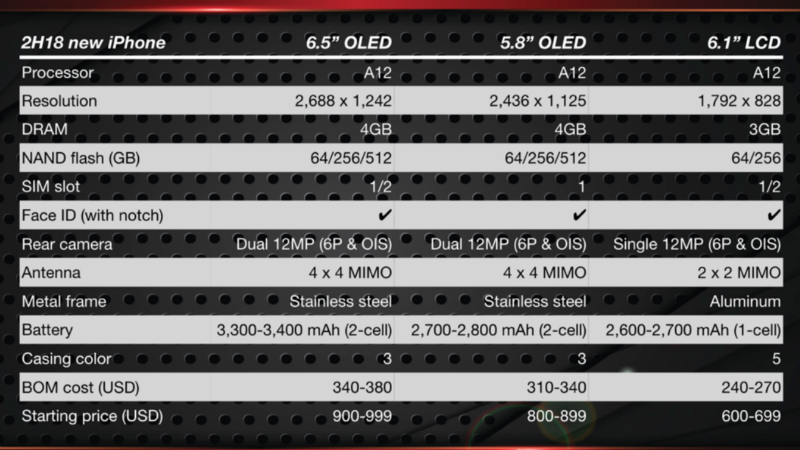 Kuo states that Apple Pencil on the new iPhone models is unlikely considering the confused user experience that this addition will offer.

Separately, Barclays has shared some insights procured from Apple's supply chain with MacRumors. Following up on a report that claims that the 6.1-inch LCD iPhone 2018 model will ditch 3D Touch, Barclays suggests that the OLED models in 2019 will also go the same route.

Interestingly, Barclays also states that the second generation of AirPods will be launched as late as the fourth quarter of 2019. An optional wireless charging case and the AirPower charging mat are said to go on sale this September.