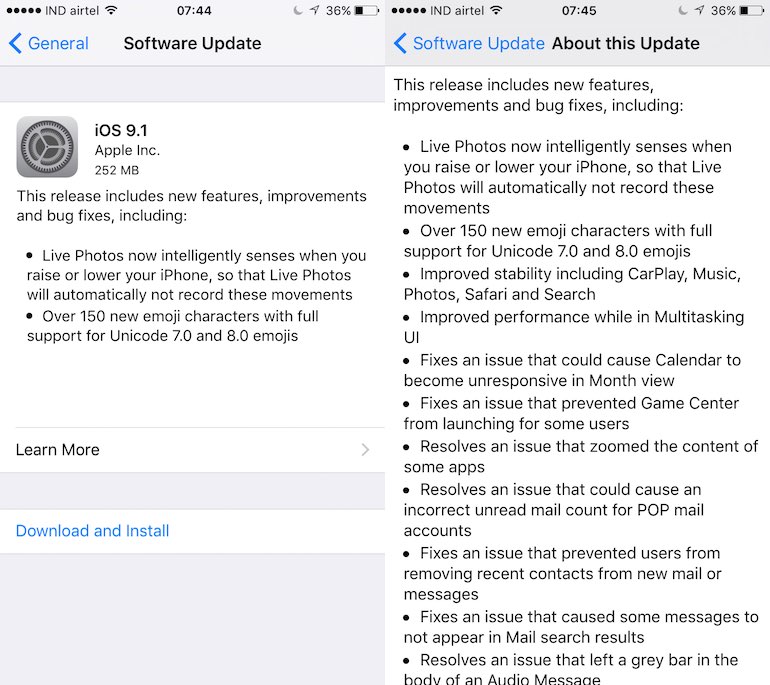 Apple has released the iOS 9.1 and OS 10.11.1 updates for eligible iOS devices and Macs respectively. Apple has also rolled out the watchOS 2.0.1 update to Apple Watch users.

iOS 9.1 brings improvements to Live Photos feature introduced in the iPhone 6s and the iPhone 6s Plus, over 150 new emoji characters (including the middle finger), and improved performance in the multi-tasking UI, apart from a host of other bug fixes detailed below.

(Also see: iPhone 6s and iPhone 6s Plus: How to Use Live Photos)

Here are the release notes of the iOS 9.1 update:

This release includes new features, improvements and bug fixes, including:

OS X 10.11.1 also adds support for the new emojis, apart from bringing a host of bug fixes, including improved compatibility with Microsoft Office 2016. Here are the release notes:

The OS X El Capitan 10.11.1 update improves the stability, compatibility, and security of your Mac, and is recommended for all users.

Continuing the theme, watchOS 2.0.1 brings new emojis to the Apple Watch, while the Cupertino-based company is also claiming improvements to the battery life with the update. Here are the release notes:

Apple has also detailed the security contents of the watchOS 2.0.1 and iOS 9.1 updates, should you be into that kind of stuff.