Apple is expected to announce iOS 13 alongside new macOS and watchOS versions at WWDC next week.

While Apple is expected to announce iOS 13 at its WWDC (Worldwide Developers Conference) next week, screenshots purportedly detailing the key features of the new iOS version have surfaced on the Web. The screenshots highlight various user interface-level changes that would take place following the arrival of the anticipated Dark Mode. Similarly, there would be some tweaks on the screenshot screen with the tray showing 3D renders of the drawing tools. Previous reports suggested that iOS 13 may debut with new multi-window support specifically for iPad users and an all-new undo gesture.

According to a report in 9to5Mac, the leaked screenshots show the impact of the Dark Mode that is visible right on the Dock on the Home screen that appears to have a dark background instead of a light one. It is also possible that the new operating system would arrive with wallpapers supporting the Dark Mode.

The Music app on iOS 13 is also likely to receive some tweaks to support the Dark Mode with a true black background. The screenshot posted by 9to5Mac suggests that the Music app with the black background would look quite attractive and vibrant on an OLED display featuring iPhone.

The Reminders app is getting a significant redesign in iOS 13 with a large sidebar showing separate boxes for Today, Scheduled, Flagged, and All sections on iPad. It is reported that Apple would use the SF UI Rounded font that it introduced with Wallet on iOS 12.2. 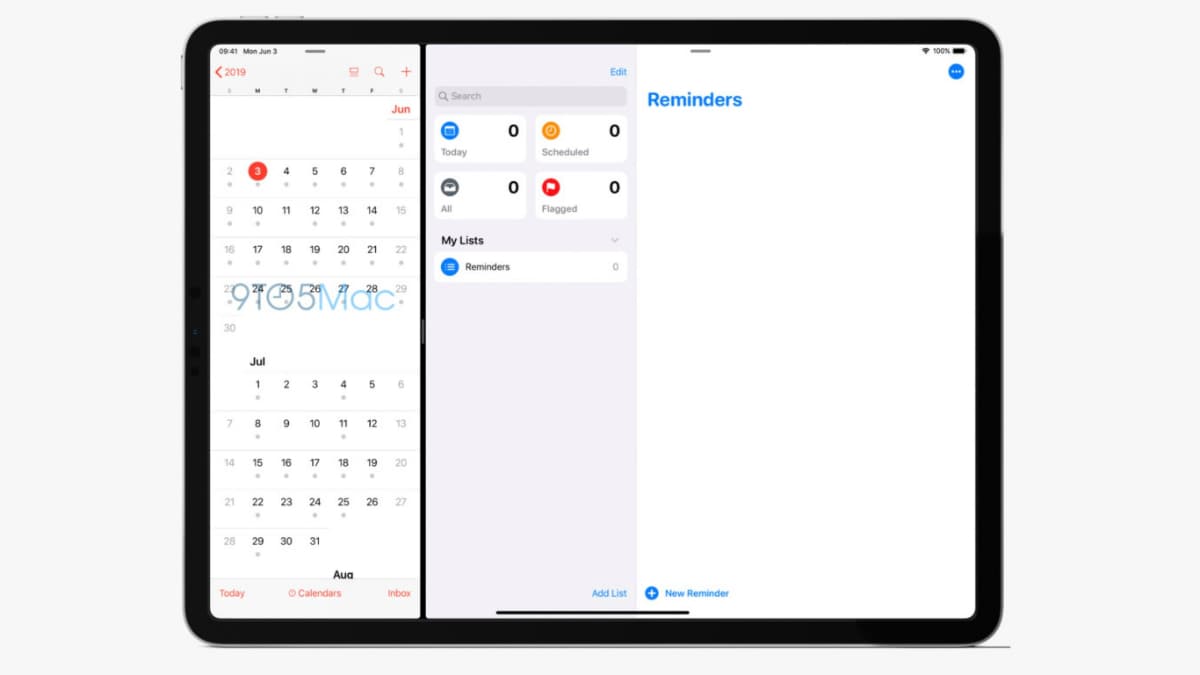 Other major changes on iOS 13 include the Find My app that is said to be a unified version of the Find My Friends and Find My iPhone apps. The app reportedly highlights a big map that fills the entire screen on iPad along with a small window listing the family and friends and a tab for personal devices. Furthermore, when using the Dark Mode, the map on the Find My app is said to look the same as Maps on a Mac machine with the Dark Mode enabled.

If we look at some of the recent reports, iOS 13 will bring multi-window support to iPad and enable new undo gesture that would require a three-finger tap on the keyboard area, sliding left and right to undo and redo actions on the screen. This would be overcome the existing undo gesture support that requires users to physically shake the device to undo the text.

Apple's iOS 13 is said to be incompatible with the iPhone 6, iPhone 6 Plus, iPhone SE, and the iPhone 5s. Moreover, the new iOS version is expected to mainly speed up the existing devices and reduce bugs existing in previous iterations.

WWDC 2019 is taking place from June 3 in San Jose, California, where Apple is believed to announce iOS 13 alongside macOS 10.15 and watchOS 6.

Further reading: iOS 13, Apple iOS, iOS, Apple
Jagmeet Singh Email Jagmeet
Jagmeet Singh writes about consumer technology for Gadgets 360, out of New Delhi. Jagmeet is a senior reporter for Gadgets 360, and has frequently written about apps, computer security, Internet services, and telecom developments. Jagmeet is available on Twitter at @JagmeetS13 or Email at jagmeets@ndtv.com. Please send in your leads and tips. More
Realme X Unlikely to Launch in India Before Second Half of 2019, Reveals Company’s India Chief
Pokemon Sleep Will Let You Earn Points for Sleeping, Coming Next Year