iOS 13’s adoption rate has reached the 50 percent mark, while iPadOS is now running on 33 percent of all active iPad tablets launched so far.

Apple has revealed the adoption metrics of iOS 13 and iPadOS within a month following their public release via the stable channel. Apple claims that iOS 13's adoption has reached the 50 percent mark on all active iPhone devices out there. The 50 percent adoption figure for iOS 13 has been achieved in less than a month since it became available. Moreover, Apple has also divulged that iPadOS – a fork of iOS tailored for iPad tablets – is now running on 33 percent of all iPad tablets launched so far.

The developer support page for the App Store has shared graphs representing the adoption rates of iOS 13 and iPadOS so far on all compatible devices, as well as those launched in the last four years separately. While iOS 13's adoption rate has reached 50 percent, 41 percent of all active iPhone devices are stuck on iOS 12, while the rest 9 percent are running an even older build. As for the iPhone devices launched by Apple in the last four years – which include the iPhone 11 trio, the iPhone XS duo, iPhone X, iPhone XR, and the iPhone 7 and iPhone 8 pair – 55 percent of them have been updated to iOS 13. 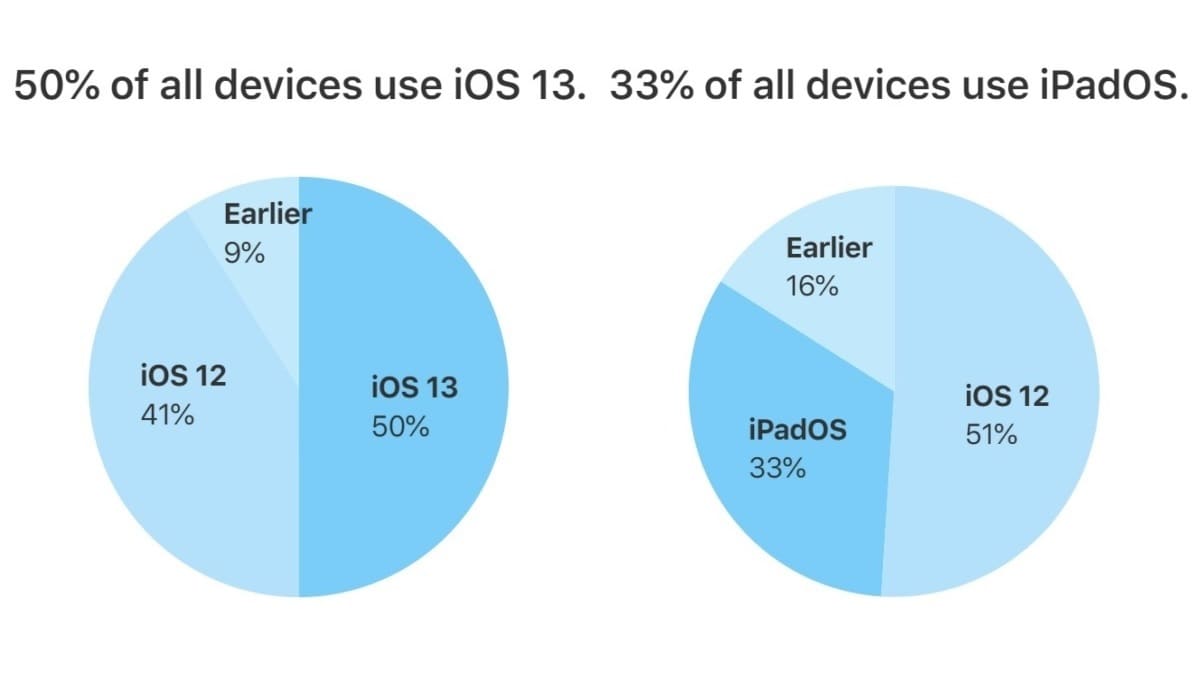 The rest 38 percent of active iPhone devices launched in the last four years are running iOS 12, while the remaining 7 percent are stuck on an older build of iOS. The adoption data of iOS 13 and its older builds have been calculated based on the number of App Store visits as measured on October 15, less than a month after the public rollout of iOS 13 began. The percentage of iPhone devices launched in the last four years that run the latest version of iOS in 2019 is the same as the adoption figures clocked by iOS 12 last year in nearly the same time frame following its release.

Apple has also shared some insights regarding the adoption rate of iPadOS. As per the data released by the company, 41 percent of all iPad tablets launched in the last four years are currently running iPadOS, 51 percent currently run iOS 12, and the rest 8 percent run an older version of iOS. On a larger scale, 33 percent of all active iPad tablets currently run iPadOS, 51 percent boot iOS 12, while the rest 16 percent are on earlier versions of iOS. The aforementioned data was also amassed based on the number of App Store visits recorded on October 15.