Apple has also added the ability to disable Memoji stickers from the keyboard on iPhone, iPad.

Apple has released iOS 13.3 and iPadOS 13.3 with a list of new parental controls to enhance its native Screen Time offering. The latest iOS and iPadOS updates that are designed for all compatible iPhone, iPod touch, and iPad models come less than a month after the Cupertino giant brought iOS 13.2.3 and iPadOS 13.2.3. The new updates also include support for physical security keys. Alongside the iOS 13.3 and iPadOS 13.3 updates, Apple has rolled out tvOS 13.3 for Apple TV users. The company has also brought watchOS 6.1.1 for all compatible Apple Watch models.

While iOS 13.3 and iPadOS 13.3 continue the journey of bug fixes and performance improvements that was primarily started following the debut of iOS 13 and iPadOS 13 in September, the fresh updates bring some notable changes too. One of them is the new parental controls. These controls provide additional communication limits to parents to let them choose who their children can call, message, or FaceTime. Parents have been offered with the ability to set either a group of people or “everyone” with whom their kids can speak to.

Similarly, Apple has provided the contact lists that parents can manage directly from the devices of their children. The new additions are a part of the Screen Time feature that debuted with the release of iOS 12 last year. Moreover, the changes can be accessed through the Communication Limits section from the Screen Time settings. 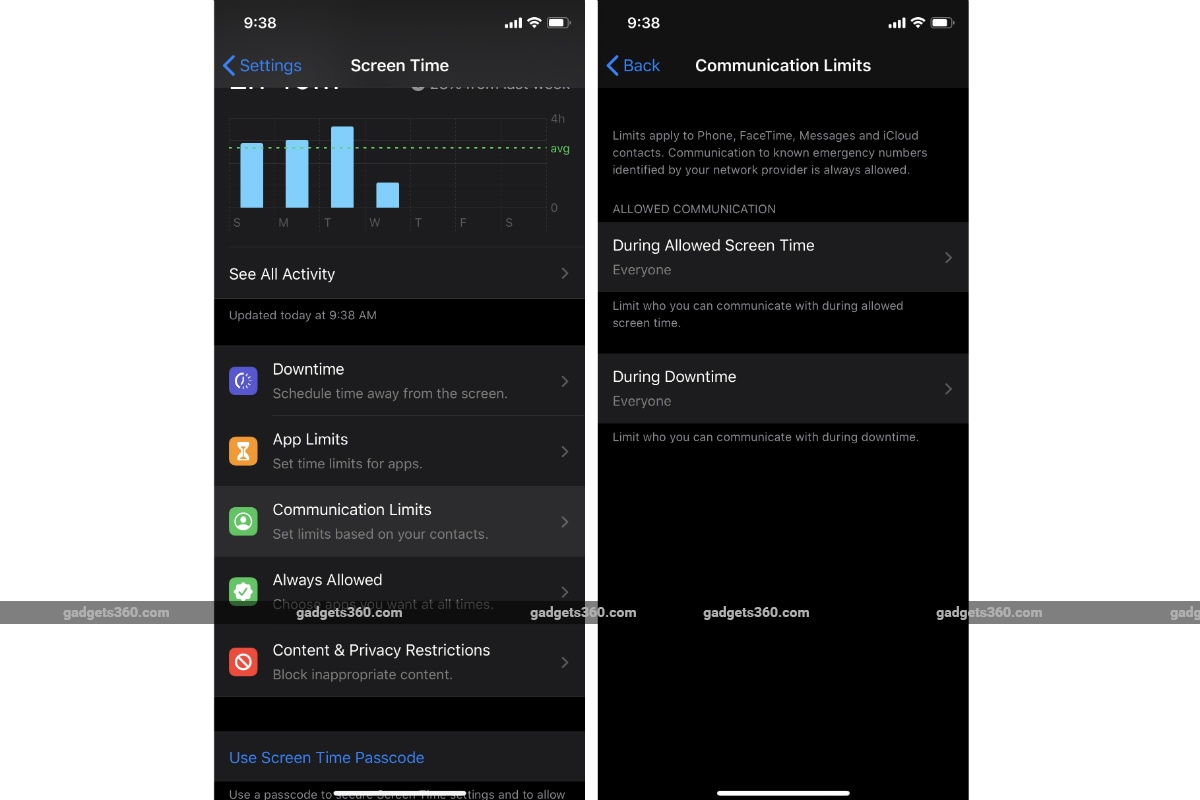 Alongside the new parental controls, the iOS 13.3 and iPadOS 13.3 updates bring support for NFC, USB, and Lightning FIDO2-compliant security keys that can be used for securely browsing websites on Safari. Platforms such as Dropbox, Facebook, Gmail, and Twitter support security keys for some time. This means that by adding a physical security key to your iPhone or iPad, you'll now get a greater account protection across social media and email inboxes.

Apple has also brought a new layout for Apple News+ stories from newspapers such as The Wall Street Journal. There is also the option to like or dislike any particular news story on the Apple News+ app with a single tap.

Since the release of iOS 13, Apple has provided Memoji stickers as a part of the regular emoji keyboard. That change has been found to be annoying by some users as people sometimes accidentally send Memoji stickers to their contacts in place of a recently used emoji. The new software version addresses this concern by adding the option to disable Memoji stickers by going through Settings > General > Keyboard > Emoji.

The latest iOS and iPadOS updates also uplift the Photos app with the ability to create a new video clip while trimming a long video file. The updates also fix issues in Mail that may prevent downloading new messages. The issue that prevented deleting messages in Gmail accounts has also been addressed. Further, problems related to incorrect characters in messages and duplication of sent messages in Exchange accounts have been resolved.

Especially the iOS 13.3 update also addresses an issue that was affecting the missed call badge on the Phone app. The new iOS and iPadOS updates also carry a fix for the issue that was incorrectly showing the Cellular Data setting off.

You can read the security content included in the new software updates by visiting the dedicated support page by Apple. There are fixes for various vulnerabilities and security loopholes that make it important to download the latest updates.

Apple has released iOS 13.3 for all the iPhone and iPod touch models compatible with iOS 13. Similarly, iPadOS 13.3 is designed for the iPad devices compatible with iPadOS 13. You can check the availability of the fresh iOS or iPadOS update on your iPhone or iPad by going to Settings > General > Software Update. Make sure that your device has sufficient amount of battery and is connected to a Wi-Fi network. 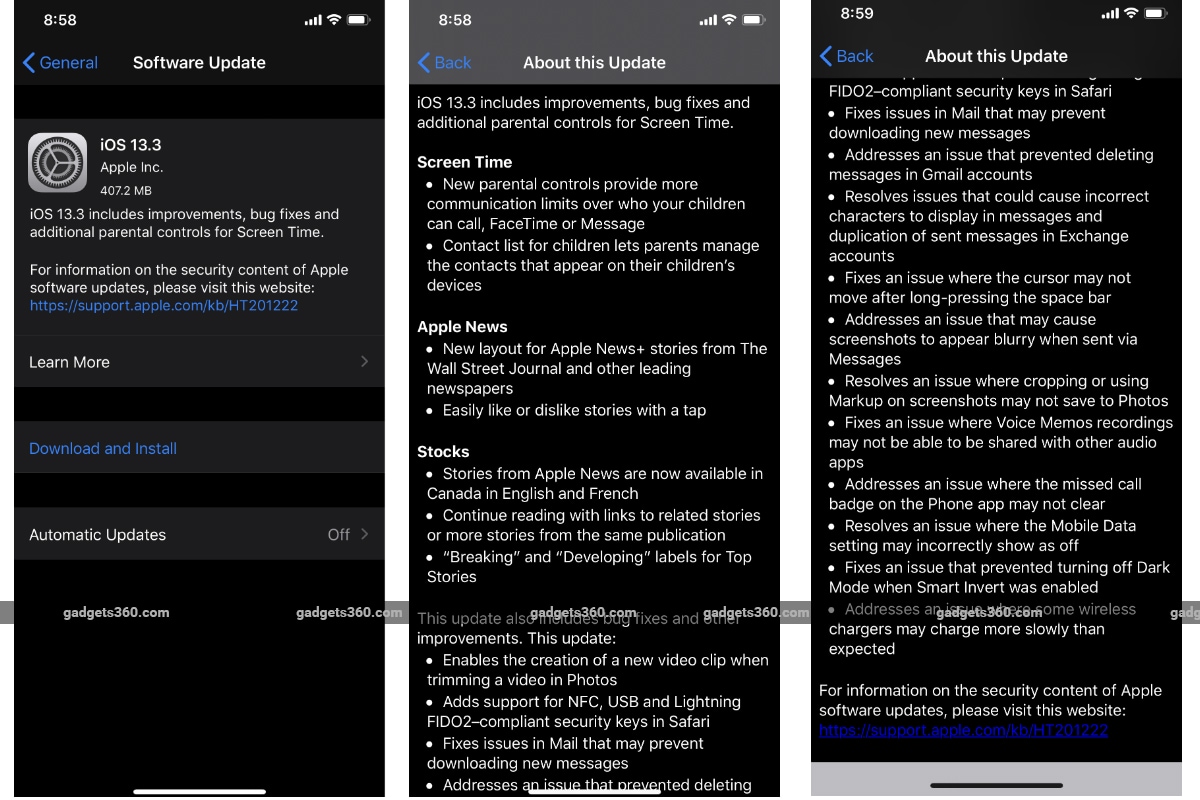 iOS 13.3 is available for all devices compatible with iOS 13

You can bring back the Up Next queue by visit the Home Screen settings on your Apple TV.

To download tvOS 13.3, open the Settings app on your Apple TV and then go to System > Software Update. The update may have already reached your device if you've enabled the automatic updates option for your Apple TV device.

Apple has also brought watchOS 6.1.1 for all compatible Apple Watch models. The new version is claimed to provide “important security updates”. It doesn't bring any notable changes, though.

You can download watchOS 6.1.1 to any Apple Watch model that's compatible with watchOS 6.0. To download the update, go to the My Watch tab on the Watch app available on your iPhone and then visit General > Software Update.

The Apple Watch needs to have at least 50 percent of battery to enable the download process. Additionally, make sure that it's placed on the charging dock while downloading and installing the update. Your iPhone is also required to be close to the Apple Watch.

Notably, the Apple Watch should restart twice before the update is completely installed. You need to enter the Watch passcode if prompted after beginning the update and then follow the on-screen instructions on your iPhone to accomplish the installation.

For HomePod users, Apple has released HomePod OS 13.3 that improves the ability of HomePod to recognise the voice profile of family members. The update also lets individual family members enable or disable personal requests. Further, there is a fix for an issue that could prevent music playback from resuming on a stereo pair after a phone call.

To download HomePod OS 13.3, you need to access the Home app on your iPhone, iPod touch, or iPad and then tap the Home icon from the top-left corner. This will bring the Software Update option that you'll need to tap to check for the latest update.

Alternatively, you can also check for the latest HomePod software update through your Mac devices by going through the Home app and then visiting Edit > Edit Home > Software Update.