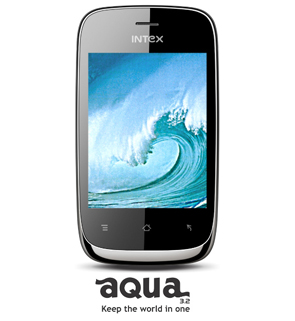 The device features a 3.2-inch (320 x 240 pixels) capacitive touch screen display and runs on the dated Android 2.3 Gingerbread. It comes with a 2MP rear camera and is powered by a 1,200 mAH battery. Internals feature a 1GHz processor with 256MB RAM. External expansion options are upto 32GB via microSD card.

Connectivity wise, the device offers 2G support with Wi-Fi, Bluetooth 3.0 and GPS. It also has language support for both English and Hindi and comes with range of features such as sound recorder, mobile tracker, audio call record, caller group. Pre-installed applications include Fruit Ninja, Nimbuzz, IRCTC and more.

The Intex Aqua 3.2 comes in Silver, Blue and Black colours. The company is also offering a back pack worth Rs. 700 with the phone as part of an introductory offer.

The Intex Cola features a 2.4-inch resistive touchscreen and a 1.3 MP camera with flash and digital zoom. It supports memory expansion up to 8GB through a microSD. The phone comes with a 1000 mAh battery, which according to the company, offers talk time of up to 3.5 hours and standby time of up to 11 days. The Intex Cola comes in two colour options, Black and White.

Earlier media reports suggested that Intex also plans to launch 5 new tablets in the current fiscal. Current tablet offerings from the company include the Intex iTab priced at Rs. 8,900, iBuddy for Rs. 6,490 and iBuddy 7.2 for Rs. 5,490.