Intex Infie 33 and Infie 3 have been launched in India as the latest smartphones by Intex Technologies. Both new models sport an 18:9 'Full View' display panel and come preloaded with a new Intex UI iteration that brings features such as Face Unlock, Privacy System, and App Freezer among others. The smartphones also have 4G VoLTE support and include preloaded apps such as Xender app, SwiftKey, and Gaana. Between the two new offerings, the Intex Infie 3 notably runs Android 8.1 Oreo (Go edition), while the Infie 33 runs Android Nougat. Earlier this year, Intex brought a series of selfie flash-featuring smartphones, including the Intex Staari and Uday.

The Intex Infie 33 price in India has been set at Rs. 5,049, and the handset comes in Black, Blue, and Champagne colour options. The Intex Infie 3, on the other hand is priced at Rs. 4,649 and is available in Grey, Gold, and Light Blue colour options. An Intex spokesperson has confirmed Gadgets 360 that both smartphones will be available for purchase through the general trade network pan-India that includes more than 80,000 retailers along with over 130 Intex Smart World Brand stores.

Intex has provided its proprietary skin on both Infie 33 and Infie 3 models. The skin brings a Spy Capture feature that is touted to secretly capture the image of the person trying to unlock the phone after three failed attempts. There is also a Face Unlock feature that unlocks the screen by recognising the face of users. Specifically for the Infie 33, the interface includes a Privacy System, App Freezer, App Clone, Bokeh Effect, Face Beauty, and Watermark. Intex has also provided a Face Cute feature to process images at the time of recording videos or live chats. Furthermore, there is a Time Lapse Mode that captures time intervals in the form of a series of images that can be played one by one as a movie.

The dual-SIM (Nano) Intex Infie 33 runs the new Intex UI on top of Android Nougat and features a 5.34-inch FWVGA+ (480x960 pixels) Full View display with an 18:9 aspect ratio. It is powered by a 1.3GHz quad-core SoC, coupled with 1GB of RAM. The handset has a 5-megapixel rear camera sensor with a dual-LED flash module. For capturing selfies, a 5-megapixel camera sensor is available at the front. The cameras support modes such as Face Beauty, Face Cute, Watermark, Time Lapse, and Night Mode.

On the storage part, the Intex Infie 33 has 8GB of onboard storage that is expandable via microSD card (up to 128GB). It has 4G VoLTE, Wi-Fi, Bluetooth, GPS/ A-GPS, Micro-USB, and a 3.5mm headphone jack. Sensors on board include an ambient light sensor, gravity sensor, and a proximity sensor. The smartphone packs a 3000mAh battery that is claimed to deliver up to 13 hours of talk time and 230 hours of standby time on a single charge. Besides, it measures 145.8x69.6x9.03mm and weighs 148 grams.

The dual-SIM (Nano) Intex Infie 3 runs the new Intex UI based on Android 8.1 Oreo (Go edition) and features a 4.95-inch FWVGA+ (480x960 pixels) Full View display with an 18:9 aspect ratio. Under the hood, there is a 1.1GHz quad-core SoC, paired with 1GB of RAM. The smartphone has a 5-megapixel camera sensor at the back with a single LED flash and a 2-megapixel camera sensor at the front. Intex has provided Face Beauty, Night Mode, Time Stamp, and Mirror Selfie. 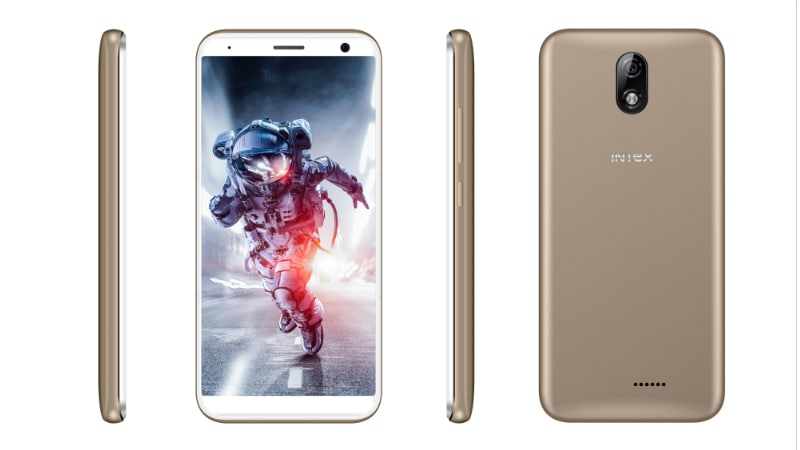 Similar to the Infie 33, the Intex Infie 3 has 8GB of onboard storage that is expandable via microSD card (up to 128GB). The smartphone has 4G VoLTE, Wi-Fi, Bluetooth, GPS/ A-GPS, Micro-USB, and a 3.5mm headphone jack. Sensors on board include a G-sensor. The smartphone packs a 2000mAh battery with a talk time of up to nine hours and 180 hours of standby time. Lastly, it measures 140.2x66.2x10.2mm and weighs 140 grams.

"After body design, processor, big display, and camera, it's time for bigger screen ratios giving life-size view and perspective," said Nidhi Markanday, Director, Intex Technologies, in a press release while announcing the new launch. "The Full View Series from the house of Intex is all about Big View and Infie 33 and 3 models are tech marvels for discerning consumers brought in the affordable new sub-5K price point for the market."