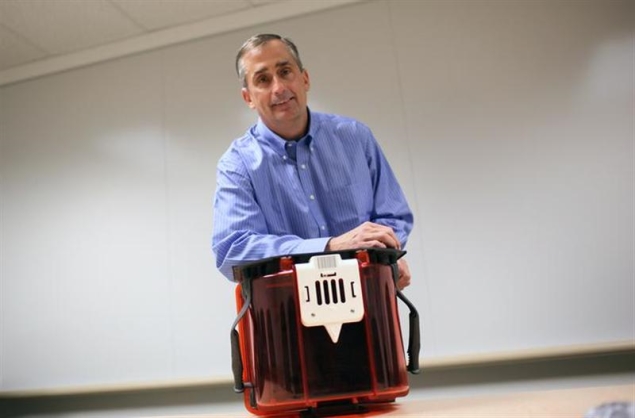 Intel Corp's new CEO said on Friday he would speed up the rollout of chips for smartphones, tablets and wearable devices as consumers move away from personal computers.

Brian Krzanich, an Intel manufacturing guru who took over as chief executive officer in May, also took a cautious tone about the top chipmaker's planned foray into television and said Intel continues to look at the business model.

"We believe we have a great user interface and the compression-decompression technology is fantastic," Krzanich said. "But in the end, if we want to provide that service it comes down to content. We are not big content players."

In their first sit-down with reporters since their promotions in May, Krzanich and Intel President Renee James said wearable computing devices would become a key battleground for mobile industry players.

Krzanich, who mentioned he had Google's Glass wearable device in his knapsack, said computing in the next few years would focus more on items for eyes and ears, as well as wristbands and watches.

"I think you'll start to see stuff with our silicon toward the end of the year and the beginning of next year," Krzanich said. "We're trying to get our silicon into some of them, create some ourselves, understand the usage and create an ecosystem."

The world's biggest chipmaker dominates the PC industry, but has been slow to adapt its chips to be suitable for smartphones and tablets. Intel is anxious to make sure it does not fall behind in future technology trends.

Krzanich and James said that under their leadership, Intel will give much more priority to its Atom mobile chips. In the past, Intel's most cutting-edge manufacturing resources were reserved for making powerful PC chips, with Atom chips made on older production lines.

"We see that Atom is now at the same importance, it's launching on the same leading edge technology, sometimes even coming before Core (Intel's line of PC chips)," said Krzanich.

"We are in the process of looking at all of our roadmaps and evaluating the timing of some of those products. It's fair to say there are things we would like to accelerate."

Bigger foundry business
James said Intel would grow its small contract chip manufacturing business, a potentially significant source of revenues. As did his predecessor, Krzanich left open the possibility of opening Intel's factories to customers making chips designed with architectures that compete against Intel's own.

Apple Inc, Samsung Electronics Co Ltd and other smartphone manufacturers favor processors designed with architecture licensed by Britain's ARM Holdings Plc, a trend Intel would like to reverse. Wall Street has speculated in recent years that Intel could strike a deal to manufacture Apple's iPhone chips.

"If there was a great customer that we had a great relationship with laptops and other mobile devices, and they said look, we'd really love you to build our ARM-based product, we'd consider it. It depends on how strategic they are," Krzanich said.

Krzanich, a three-decade Intel veteran, said he changes laptops and smartphones about once a month to try new ones out. He is currently using a Samsung Galaxy phone and a Lenovo Helix laptop with a detachable keyboard.

Under previous CEO Paul Otellini, Intel embarked on a plan to launch an Internet television service with live and on-demand content, entering a hotly competitive race outside its core chip business.

While Intel has said it expects to launch its service later this year, as of earlier this month it had not yet finalized programming deals with major content companies.

It faces competition from Apple, Amazon and Google, as well as traditional cable companies.

Processors based on technology from ARM and designed by Qualcomm Inc, Samsung and Nvidia Corp account for most of the mobile market. But Intel has shown some recent signs of improvement in mobile, progress Krzanich is keen to build on.

Samsung has chosen an Intel processor for one of its top-tier Android tablets for the first time.

And last month, the U.S. chipmaker unveiled Silvermont, the most extensive overhaul of its mobile processors to date, with improved performance and lower power consumption that some experts believe might help it compete better against Qualcomm.