Infinix Note 7 will be powered by the octa-core MediaTek Helio G70 SoC and have 6GB of RAM. 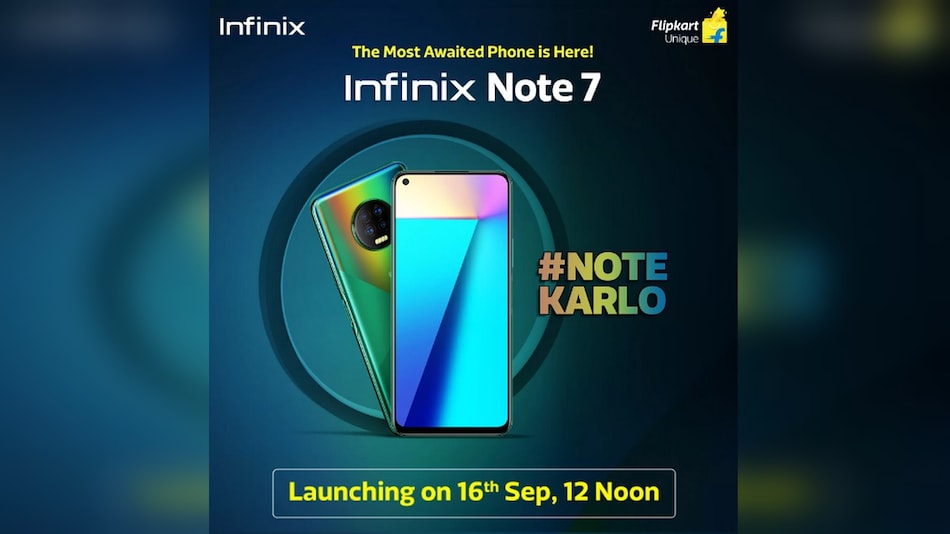 Infinix Note 7 will debut in India on September 16 at 12pm (noon) on Flipkart, as revealed by a dedicated page on the e-commerce website. The phone is already available in a few regions including the Philippines, and will now be making its way to the Indian market. The Infinix Note 7 is powered by an octa-core MediaTek processor and has a large 6.95-inch display. The phone will come with a quad rear camera setup and a hole-punch design for the selfie camera.

Infinix has not shared Indian pricing for the Infinix Note 7 at the time of writing. However, the phone made its debut in Philippines for PHP 7,990 (roughly Rs. 12,100) for the single 6GB + 128GB variant. It was launched in three colour variants namely, Aether Black, Bolivia Blue, and Forest Green.

The Indian pricing and timings for the sale will be unveiled on Wednesday, September 16. The company has not revealed if there will be a virtual event for the unveiling of the Infinix Note 7.

While the company has teased a few specifications on Flipkart ahead of its official launch, the complete list of specifications for the Infinix Note 7 are known. The dual-SIM (Nano) Infinix Note 7 runs on Android 10 with XOS 6.0 on top. It features a 6.95-inch HD+ (720x1,640 pixels) IPS display with 20.5:9 aspect ratio. It is powered by octa-core MediaTek Helio G70 SoC, coupled with 6GB of RAM. It has 128GB onboard storage that is expandable via microSD card (up to 2TB).

For photos and videos, the Infinix Note 7 has a quad rear camera setup that includes a 48-megapixel primary sensor, 2-megapixel macro sensor, 2-megapixel depth sensor, and a low-light video camera along with a quad-LED flash. For selfies, you get a 16-megapixel front camera, housed in the hole-punch cut out.

Connectivity options on the Infinix Note 7 include 4G LTE, Wi-Fi 802.11ac, Bluetooth, GPS/ A-GPS, Micro-USB, and a 3.5mm headphone jack. The Infinite Note 7 also has the side-mounted fingerprint sensor and comes with an accelerometer, ambient light sensor, magnetometer, and a proximity sensor. The smartphone packs a 5,000mAh battery with support for 18W fast charging. You also get dual speakers with DTS Audio processing.