Market research firm Canalys on Wednesday reported that the Indian smartphone market contracted for the first time in its history this past quarter. The report claims that shipments in the country fell 4 percent year-on-year to just under 27 million units. The report adds that the primary factor for falling shipments was the impending introduction of GST on July 1, said to have created an adverse impact due to confusion in the market.

Speaking about the impact of GST, Canalys Analyst Rushabh Doshi said, "There is general confusion in the entire market over GST and a lack of awareness about the changes that are needed. Apprehension among distributors and retailers regarding the impact on prices has caused the market to adopt a wait-and-see policy."

As seen in reports from other research firms, once again, Chinese firms dominated the Indian smartphone market in Q2 2017, though Samsung retained its top position. The rest of the four in the top five were Chinese OEMs. Collectively, Xiaomi, Oppo, Vivo, Gionee, and Lenovo control over 50 percent of India's smartphone market, Canalys. About the GST effect though, Canalys says all is not doom and gloom, and the market should recover - and in fact, be stronger than before.

Samsung in Q2 2017 took a 25 percent share of smartphone shipments in India, followed by Xiaomi with 4.8 million units. The report says Vivo took the third spot, with an all-time high of 3.4 million units, after enjoying increased popularity in tier-two and tier-three towns. Oppo, on the other hand, displaced Lenovo to take the fourth position. Finally, Lenovo rounded off the top five, with 1.9 million units shipped in the second quarter of the year. 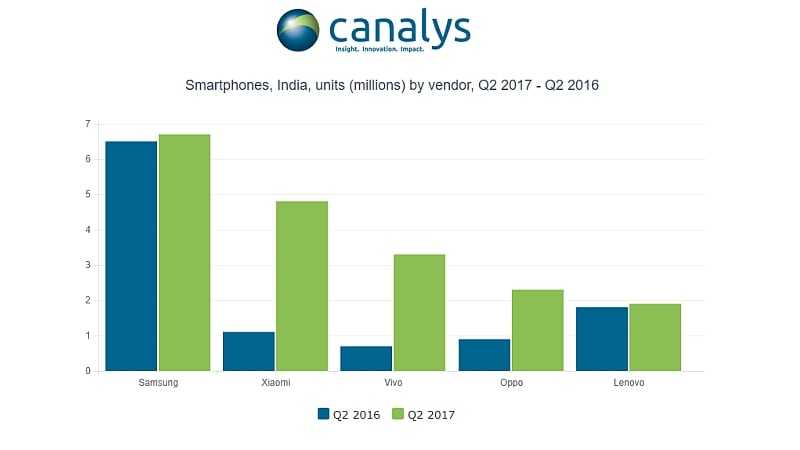 Top 5 vendors all saw increase in shipments, while others' contributed to the decline

Canalys Research Analyst Ishan Dutt elaborated on the market scenario in a statement, "With China suffering its own decline this quarter, India is a market of huge strategic importance to Chinese smartphone vendors. Samsung is under immense pressure in the mid-tier from the Chinese players. For now, its low-end J Series is helping it sustain its lead and maintain share. But it needs to use its brand to make its mid-tier devices more desirable. The recently launched S8 and S8+ have helped it win back some of its premium share. It now needs to generate a halo effect around these products in the mid-tier to counteract the threat from China."