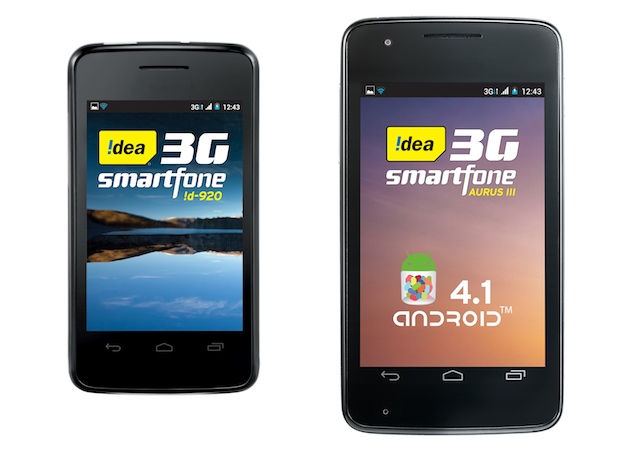 The Idea ID 920 is an entry-level dual-SIM Android 3G Smartphone, targeted at first time data users in semi-urban markets. It's powered by a 1GHz processor, has 256MB RAM and sports a 3.5-inch capacitive touch display that has a resolution of 320x480 pixels. The phone runs Android 2.3 Gingerbread, which is an old version of the OS.

It features a 2-megapixel rear camera and offers internal storage capacity of 512MB expandable up to 32GB via microSD card. A 2GB memory card is bundled with it. The phone comes with a 1400mAh battery.

On the other hand, the Idea Aurus III runs Android 4.1 Jelly Bean and features a 4-inch TFT screen that has a resolution of 480x800 pixels. It's powered by a 1GHz processor, has 512MB RAM and 4GB internal storage expandable up to 32GB via microSD card. The dual-SIM phone sports a 5-megapixel rear camera and a VGA front facing camera.

Commenting on the launch, Sashi Shankar, Chief Marketing Officer, Idea Cellular said, "Keeping in mind the requirements of the fast evolving Indian consumer in the light of the ongoing mobile broadband revolution, the new 3G smartphones from Idea are priced affordably to upgrade existing 2G users to 3G. Device plays an important role in establishing data experience for the user, but currently 3G smartphones are priced relatively high in the Indian market. Idea is bridging this gap by bringing low-cost devices with high-end features to proliferate 3G among all segments of users."

"We have already sold more than 3 lakh 3G smartphones ever since we entered the devices market, a little over a year ago, leading to a rapid increase of data users to over 26 million in Q4FY13. We are confident that our expanding 3G devices portfolio will further spur data usage on our network", added Shankar.

Idea is also offering a data offer for its 3G customers with the phones. For a pack of Rs. 261, ID 920 and Aurus III users can get 1GB and 1.6 GB of 3G data, respectively, and Idea TV subscription free for the first 3 months. The 3G pack is available along with the smartphones in all Idea 3G circles.

In regions where 3G is not available, users can opt for a 2G data pack offering unlimited 2G data for Rs. 261.

The new 3G smartphones from Idea are available at all major mobile retail stores and Idea outlets across the country.

150 mobile towers to be set up in Jammu and Kashmir for stronger network: Kruparani Killi
Microsoft Xbox One: Will gamers want it?