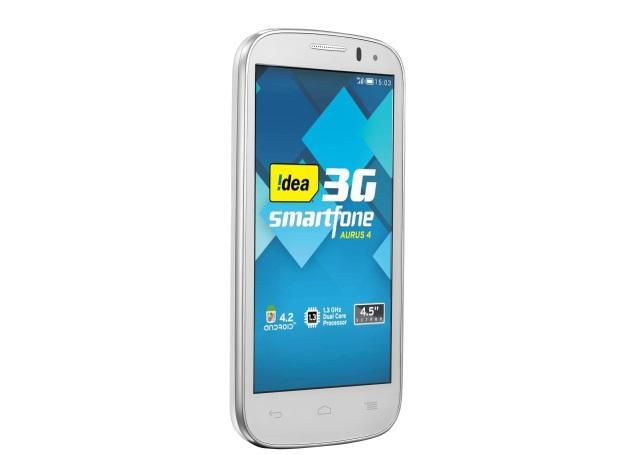 The Aurus IV smartphone has been priced at Rs. 8,999 and the telecom operator plans to offer it through its own retail and service outlets across major 3G markets including Gujarat, Maharashtra and Goa, Andhra Pradesh, Madhya Pradesh and Chhattisgarh, Kerala, UP West and East, Haryana, Jammu and Kashmir and Himachal Pradesh.

The Idea Aurus IV features a 4.5-inch TFT display with a resolution of 480x854 pixels and a 16 million colour gamut. It runs Android 4.2 Jelly Bean and is powered by a 1.3GHz dual-core processor along with 512MB of RAM. The phone offers 4GB of inbuilt storage, which is expandable up to 32GB via microSD card. The Aurus IV sports an 5-megapixel fixed-focus rear camera and also includes a 0.3-megapixel front-facing camera. It is a dual-SIM device (GSM+GSM) and will be available in Black and White colours. The device packs an 1800mAh battery which can deliver up to 4 hours of talktime and up to 392 hours of standby time on a 3G network.

Launching the 3G smartphone, Sashi Shankar, Chief Marketing Officer, Idea Cellular said, "The young and savvy youth of India has a huge appetite for content on mobile, but is deterred due to highly priced smartphones in India. Idea is bridging this gap by offering 3G smartphones packed with high-end features at relatively low price. Idea Aurus 4 is the latest addition to our growing portfolio of 3G devices which is enabling a large base of Idea users experience 3G for the first time in India."

Idea claims that it has previously sold over 6 lakh devices from a dozen models in the Indian market.