iBall on Monday launched its mSLR Cobalt 4 smartphone in India. The handset will be available across the region in the coming weeks for a best buy price of Rs. 8,499.

The smartphone's highlights are the four detachable mSLR lenses that come bundled with the package. The bundles lenses included for the handset are zoom lens with 8x zooming power, fish eye lens with 175-180 degree viewing angle, macro lens with 10x magnification and 10-15mm minimum object distance, and wide-angle lens with 130 degree viewing angle. A pouch for lenses and a cleaning cloth is also included.

The dual-SIM dual-standby supporting iBall mSLR Cobalt 4 smartphone runs Android 4.4 KitKat out-of-the-box. The mSLR Cobalt 4 comes with a 5-inch (540x960 pixels) qHD IPS display with a pixel density of 220ppi. The smartphone is powered by a 1.4GHz octa-core Cortex-A7 processor (unspecified) coupled with 1GB of RAM. It comes with 8GB of inbuilt storage, which is further expandable via microSD card (up to 32GB). 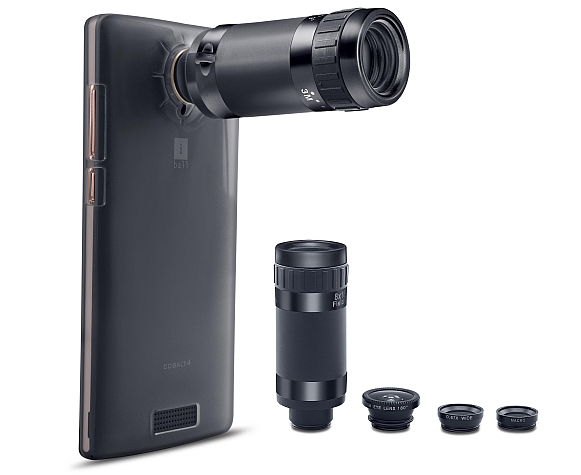 The mSLR Cobalt 4 smartphone sports an 8-megapixel rear autofocus camera with dual-LED flash, while there is a secondary 3.2-megapixel front-facing camera also on board with a 'soft flash'. The camera offers software features like face beauty, live photo, and multi-angle view. On the connectivity front, the handset includes 3G, Wi-Fi with Direct functionality, GPRS/ EDGE, GPS/ A-GPS, Micro-USB, FM radio, and Bluetooth 4.0 options.

The smartphone packs an 2000mAh battery. The mSLR Cobalt 4 smartphone also features HotKnot file transfer technology, which is similar to near field communications (NFC) in terms of application. It features a proximity sensor, ambient light sensor, and accelerometer. Apart from some gesture recognition features, the smartphone also offers a 'flip to mute' feature.

"We are very excited with our newest launch which revolutionizes and redefines smartphones. With mSLR Cobalt 4 the users shall be mesmerized on the Smartphone's Camera with detachable lenses. The Multiple options of the lens shall snap great pictures and change the way photographs are captured on the smart phones! Its again heartening that we are the first in India to launch a product with this technology," said Sandeep Parasrampuria, Director iBall during the smartphone launch.