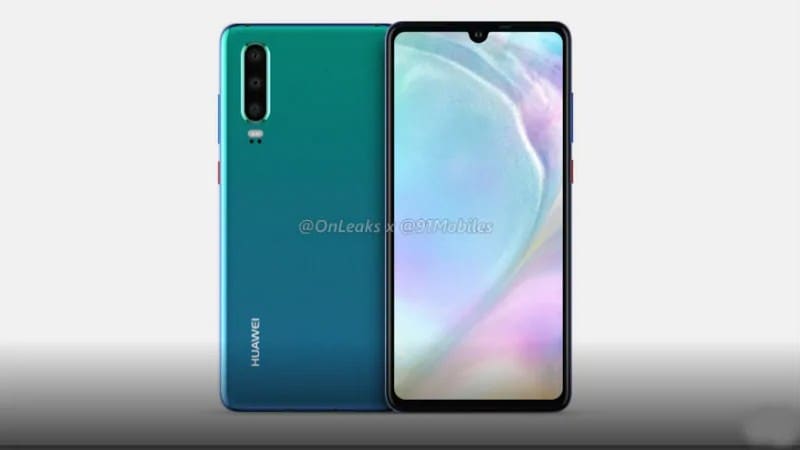 Huawei's upcoming lineup of flagship smartphones, the P30 and the P30 Pro, are rumoured to bring some impressive imaging hardware, new design, and a curved panel. A new report emerging from Huawei's home turf indicates that both the smartphones will feature an OLED display and will sport an optical in-display fingerprint sensor for authentication. Additionally, the Huawei P30 Pro will reportedly come equipped with a periscope-style rear camera setup to facilitate optical zoom, which has the benefit of lossless image magnification. Additionally, both the upcoming smartphones will reportedly be powered by the HiSilicon Kirin 980 SoC.

Earlier this month, a concept render of the Huawei P30 Pro hinted at the presence of an in-display fingerprint sensor on the upcoming smartphone. A new report which has surfaced on QQ lends some support to the previous leak and claims that the Huawei P30 and the P30 Pro duo will come equipped with an optical in-display sensor and will ditch the home button-embedded physical fingerprint sensor present on their predecessors. And in order to equip the two upcoming smartphones with an optical in-display fingerprint sensor, Huawei has reportedly gone for an OLED panel for both the smartphones. It must be noted here that the Huawei P20 featured an LCD panel, so the OLED panel on its successor is definitely an upgrade.

Moreover, both the new flagships from Huawei will flaunt a waterdrop notch and a curved panel,  something we have already seen in case renders of the upcoming duo. Talking about the display, the Huawei P20 will feature a 6.1-inch OLED panel while the Huawei P30 Pro will sport a larger 6.5-inch display. Both the smartphones will reportedly be powered by the HiSilicon Kirin 980 SoC coupled with 8GB of RAM on the Huawei P30 and 12GB of RAM on the Huawei P30 Pro. Both the smartphones will boot EMUI 9.1, however, it is not clear which build of Android it will be based on.

As for the P30 Pro, it will reportedly feature a periscope-style rear imaging hardware to facilitate lossless optical zoom, something which Oppo claims to deliver with its 10x hybrid optical zoom technology for smartphone cameras. No additional information was revealed regarding the resolution of the imaging sensors, but as per a previous report, the P30 Pro's imaging hardware will consist of a 38-megapixel Sony IMX607 image sensor with Dual Bayer technology and three-speed native sensitivity with ISO 50/ 500/ 5000. However, details about pricing and an expected launch timeline are yet to be revealed.

Vivo Apex 2019 Render Leaks Just Ahead of Its Launch Today