Huawei P30 Pro was unveiled in Paris earlier this week

Huawei P30 Pro has received a software update just days after it was unveiled in Paris -- alongside the Huawei P30. The new update, which is apparently rolling out as an over-the-air (OTA) package, enables the Always on Display feature of the smartphone to work with the third-party app notifications. There are also improvements for the camera, fingerprint unlock, and audio experiences of the Huawei P30 Pro. Notably, the latest update comes ahead of the availability of the flagship Huawei model. The phone is currently listed for pre-orders in select countries.

As per the screenshots posted by Twitter user Paul O'Brien, the latest Huawei P30 Pro update brings EMUI version 9.1.0.124 with build number C431E4R2P2. The update most prominently upgrades the Always on Display feature by enabling notifications from third-party apps when the screen is off. The feature, which is also available on other Huawei phones, including the Huawei P20 Pro and Mate 20 Pro, was previously limited to just the preloaded apps.

The changelog featured on the posted screenshots shows that the update also optimises the camera performance of the Huawei P30 Pro in "certain scenarios". Also, it fixes the audio issue that was affecting the playback experience specifically of the Instagram videos. The update additionally improves fingerprint unlock performance and comes with the March 2019 Android security patch. Moreover, there is a fix for the pre-installed SwiftKey keyboard. 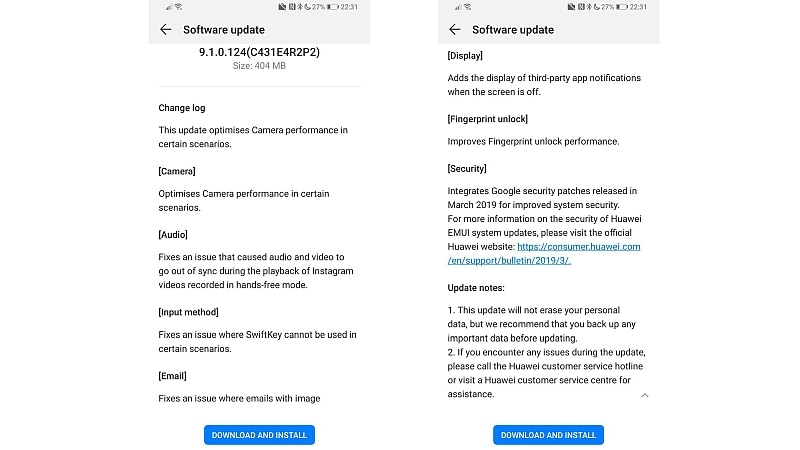 The Huawei P30 Pro also has a 32-megapixel selfie camera along with an f/2.0 lens. Additionally, there is AI HDR+ support to optimise overexposed and backlit selfies.

The optics of the Huawei P30 Pro helped it achieve the highest-ever DxOMark score 112, with specifically its photo score reaching the mark of 119.