Huawei P30 Pro Price in India to Be Revealed on April 9, Amazon Reveals 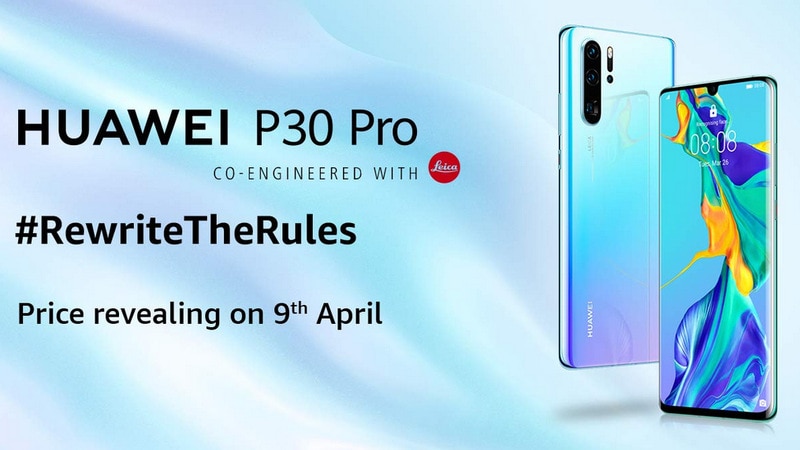 Huawei P30 Pro price in India will be revealed next week, Amazon India has announced

Huawei P30 Pro price in India will be revealed on April 9, Amazon India has confirmed on its landing page for the smartphone. The smartphone will be officially launched on the same day, with the company sending media invites for a launch event in New Delhi. To recall, the Huawei P30 Pro was launched at an event in Paris last month, alongside the Huawei P30. As we mentioned in a previous article, it is unlikely the company will launch the Huawei P30 in the country, if Amazon's P30 Pro-specific teaser and the P20 Pro launch is anything to go by. It may, however, launch the Huawei P30 Lite in India, following the pattern of the P20 Pro and P20 Lite.

Amazon India has updated its landing page to note that the Huawei P30 Pro price in India will be revealed on April 9. We can also expect Huawei to detail the smartphone's availability in India, and perhaps put it up for pre-orders. As we mentioned, the Huawei P30 Pro was unveiled globally at an event in Paris late last month. The Huawei P30 was unveiled alongside, but as we mentioned, looking at Amazon's P30 Pro-specific landing page and the strategy Huawei employed with the Huawei P20 Pro and Huawei P20, we can expect the vanilla variant will not make its way into the country. On the other hand, the Huawei P30 Lite, which was quietly announced late last month when it was spotted as up for pre-orders in Canada and the Philippines, may indeed make its way to the country, like the P20 Lite did.

The dual-SIM Huawei P30 Pro runs EMUI 9.1 based on Android 9 Pie. It sports a 6.47-inch full-HD+ (1080x2340 pixels) OLED screen with 19.5:9 aspect ratio, complete with a waterdrop-shaped display notch and an in-display fingerprint sensors. The screen also uses Acoustic Display Technology that uses an in-screen maglev speaker to turn the display itself into a speaker like LG's G8 ThinQ smartphone.

The Huawei P30 Pro is powered by the octa-core HiSilicon Kirin 980 SoC, coupled with 8GB of RAM. Of course, the biggest highlight of the Huawei P30 Pro is its camera setup. It's good enough for DxOMark to place it at the very top of its rankings, with an overall score of 112. Huawei has added a quad-camera setup on the P30 Pro, which houses a 40-megapixel primary camera with 1/1.7-inch Huawei SuperSpectrum Sensor and f/1.6 (27mm) lens, a 20-megapixel ultra-wide-angle secondary camera with an f/2.2 (16mm) lens, an 8-megapixel telephoto camera with an f/3.4 (125mm) lens, and a Time-of-Flight (TOF) camera. There is also dual OIS (optical image stabilisation). You also get Colour Temperature and Flicker sensor. The camera setup enables 5x optical, 10x hybrid, and 50x digital zoom. For selfies, the Huawei P30 Pro features a 32-megapixel front shooter with an f/2.0 lens, as well as AI HDR+ to optimise overexposed and backlit selfies.