Huawei P30 Pro has been launched in India, at an event in New Delhi on Tuesday, alongside the P30 Lite. As you'd probably recall, the Huawei P30 Pro was globally unveiled alongside the Huawei P30 at an event in Paris late last month. On the other hand, the Huawei P30 Lite was unveiled quietly last month, when its pre-order listings went live. Of course, the P30 Pro's biggest highlight is its quad rear camera setup co-engineered by Leica, apart from features like reverse wireless charging, in-display fingerprint sensor, IP68-certified dust and water resistance, as well as its 7nm HiSilicon Kirin 980 SoC. Read on for more details about the Huawei P30 Pro price in India, release date, launch offers, and specifications.

The Huawei P30 Pro price in India has been set at Rs. 71,990 for its lone 8GB RAM/ 256GB inbuilt storage variant. It will be available in Aurora and Breathing Crystal colour variants. Huawei is touting no-cost EMI options, as well as up to 5 percent cashback (between April 15 and April 17). There is also 6-month screen insurance. Jio subscribers get up to Rs. 2,200 cashback and double data for 5 recharges, apart from benefits up to Rs. 10,000. Another launch offer is a bundled offer to buy the Huawei Watch GT (worth Rs. 15,990) at Rs. 2,000 alongside. It will be available via Amazon India and Croma stores.

The Huawei P30 Pro will go on sale for the first time on Amazon India for Prime customers from 12am (Midnight) IST on April 15, while regular customers will be able to buy it from 12am (Midnight) IST on April 16. It has gone up for pre-orders via Croma, and it will be available from Croma stores from April 19. recall, the smartphone was first unveiled at an event in Paris last month, in two variants - 8GB/ 256GB and 8GB/ 512GB. As we mentioned, Huawei at its New Delhi launch event on Tuesday also unveiled its 'affordable' flagship -  the Huawei P30 Lite.

Getting to the biggest highlight of the Huawei P30 Pro, the smartphone's quad rear camera setup. It features a 40-megapixel primary SuperSpectrum sensor with a wide-angle lens, an f/1.6 aperture, and optical image stabilisation (OIS), paired with a 20-megapixel sensor with an ultra wide-angle lens and an f/2.2 aperture, as well as a 8-megapixel sensor with a telephoto lens and an f/3.4 aperture apart from OIS. The fourth camera in the setup is a Huawei time-of-flight (ToF) sensor. The setup features laser autofocus, phase detection autofocus, and contrast-based autofocus, and also supports AIS (Huawei's AI-based image stabilisation). It offers 5x optical zoom, 10x hybrid zoom, and 50x digital zoom. There is also a Dual-View video mode that lets users shoot wide-angle and close-up views at the same time. 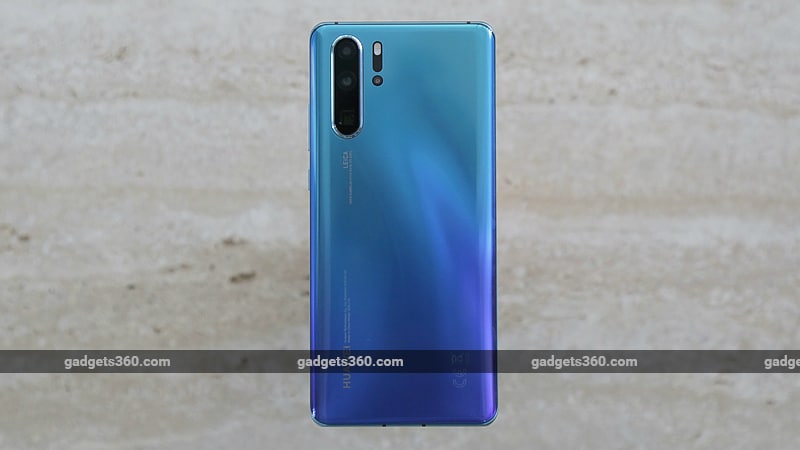 The Huawei P30 Pro runs on a 4,200mAh battery, with support for the company's 15W Wireless Quick Charge, as well as its 40W SuperCharge feature. The smartphone also offers reverse wireless charging. It measures 158x73.4x8.41mm, and weighs 192 grams. The Huawei P30 Pro is also IP68-certified for dust and water resistance.