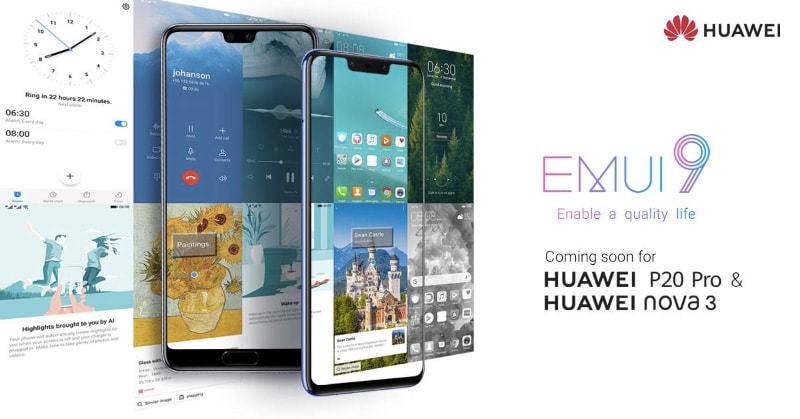 Huawei P20 Pro, Huawei Nova 3 are the first phones in Huawei India's lineup to get the update

Huawei India has teased the rollout of the EMUI 9 update in the country on its social media channels. Announced in October last year, EMUI 9.0, which is based on Android 9.0 Pie, introduces a new UI, gesture-based navigation, and HiVision visual search that lets you do image search just like Google Lens. There are also some market-specific features like Paytm integration, local language support, and an Indian calendar. The teased image clearly mentions that the first phones to get this update would be the Huawei P20 Pro and the Huawei Nova 3.

The teaser post doesn't specify a date for the rollout, and only mentions that it is 'coming soon' for the mentioned smartphones. It's worth nothing that both the phones are powered by the HiSilicon Kirin 970 SoC, which makes it a possibility for other phones sporting this chipset getting the update soon after. So besides the Huawei P20 Pro (Review) and the Huawei Nova 3 (Review), this includes Huawei P20, Huawei Mate 10, Huawei Mate 10 Pro, Honor Play, Honor View 10, and Honor 10.

Besides the mentioned features EMUI 9 also recognises a great range of food items and can provide a calorie estimate though the camera image. A new feature called HiTouch enables users to search for something online by long pressing two fingers on an image. Huawei claims that this feature can recognize more than 120 million items from more than 200 e-commerce platforms and the official online stores of nearly 100 brands. Other EMUI 9.0 features include one-click projection, GPU Turbo 2.0, and PC Mode as well.

We had earlier reported about EMUI's global rollout plans by the end of 2018, and now we finally have an official word on the Indian update, as vague as it may be.