Huawei P20 and P20 Plus Renders and Specifications Leak

Huawei was earlier expected to make a big splash at Mobile World Congress 2018 in Barcelona this month, but recent rumours have suggested the Chinese phone maker is planning to unveil its next flagship series - Huawei P20, P20 Lite, and P20 Plus - at a separate event in Paris next month. Fresh 3D renders have now surfaced online that reveal certain design elements and specifications of the upcoming smartphones. We can expect the Huawei P20 Plus to sport a 4000mAh battery, a vertical triple camera setup, and an always-on display.

Reputed tipster OnLeaks has collaborated with TigerMobiles to unveil 3D renders of Huawei's next-gen flagship smartphones. The renders highlight previous suggestions that the Huawei P20 and Huawei P20 Plus will sport three cameras on the back, with a vertical setup. On the other hand, the P20 Lite is expected to feature a dual camera setup. Apart from that, the P20 might sport a 5.7-inch (roughly) display, while the P20 Plus is expected to get a bigger, near-6-inch display. Renders also reveal that the entire range might not launch with a 3.5mm headphone jack. All three phones are seen to have dual selfie cameras as well. 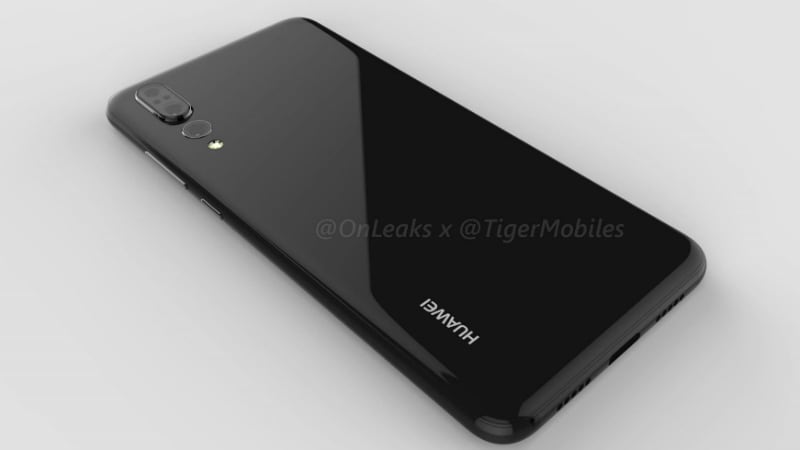 Additionally, a report by XDA Developers claims that the Huawei P20 will get a 3320mAh battery and the P20 Plus might get one with capacity set at 4000mAh. It also notes that the P20 Plus has been spotted (courtesy FunkyHuawei) to get the Always On Display feature, last seen on Huawei's Mate 10 Pro. Whether this means that the P20 Plus will get an OLED display - like the Mate 10 Pro - is currently uncertain.

The report also suggests Huawei will incorporate its new Point Cloud Depth camera in the previously reported iPhone X-style notch expected on the upcoming flagship series. Lastly, both the Huawei P20 and P20 Plus are expected to get the latest HiSilicon Kirin 970 SoC, which currently powers the Honor View 10 and Huawei Mate 10 series.

Huawei P20 and P20 Plus Renders and Specifications Leak
Comment