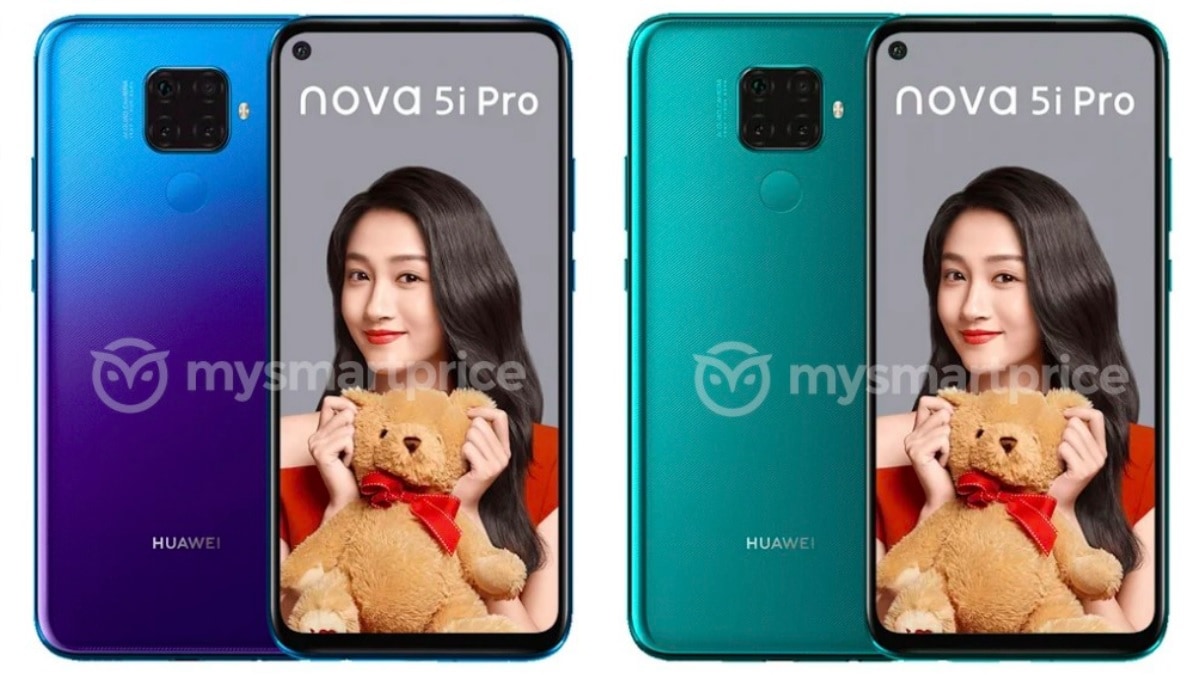 Huawei Nova 5i Pro is all set to launch on July 26, and so far, the company has confirmed a few of its key highlights such as quad rear cameras, hole-punch display, and a 32-megapixel selfie camera. But before the phone could go official, its key specifications, alleged press renders, and colour variants have been leaked. The Huawei Nova 5i Pro is tipped to arrive in three shades and will pack a 48-megapixel main camera at the back. Additionally, a hands-on video showcasing the phone from all angles in its black avatar has also surfaced online. To recall, the smartphone is expected to be launched as the Huawei Mate 30 Lite in Europe.

Set to go official at an event two days from now in China, the Huawei Nova 5i Pro has already been confirmed to pack quad rear cameras and the in-house Kirin 810 SoC. The new leak, which comes courtesy of MySmartPrice in collaboration with tipster Ishan Agarwal, shows press renders of the upcoming phone and adds that it will be available in three colour options – teal/green, gradient blue, and black. The phone is shown packing quad rear cameras and a fingerprint sensor sits below it, while the hole-punch display has a cut out for the camera at the top left corner.

As far as specifications go, the Huawei Nova 5i Pro aka Huawei Mate 30 Lite is tipped to pack a 6.26-inch full-HD+ (1,080 x 2,340 pixels) display and will be powered by the Kirin 810 SoC paired with 6GB of RAM and 128GB of internal storage. However, another variant with 8GB of RAM coupled with 256GB of internal storage is also said to be in the pipeline. The lights will be kept on by a 4,000mAh battery, but there is no word on support for fast charging.

As far as the rear camera hardware goes, the Huawei Nova 5i Pro is tipped to pack a 48-megapixel primary camera with an f/1.8 lens, assisted by an 8-megapixel wide-angle lens, a 2-megapixel depth sensor, and another 2-megapixel macro lens. Selfies will be handled by a 32-megapixel front camera with an f/2.0 lens. The phone will reportedly offer a dedicated night mode that will let users capture brighter low-light selfies with more details.

Moreover, the phone has also appeared in a live hands-on video that shows its black variant from all angles. The leak, which comes courtesy of tipster Sudhanshu Ambhore, shows a design that is identical to what we've seen in official teasers and leaked live images that surfaced earlier this week. The phone was recently spotted on TENAA as well and is set to make its debut as the Huawei Mate 30 Lite in markets outside China.