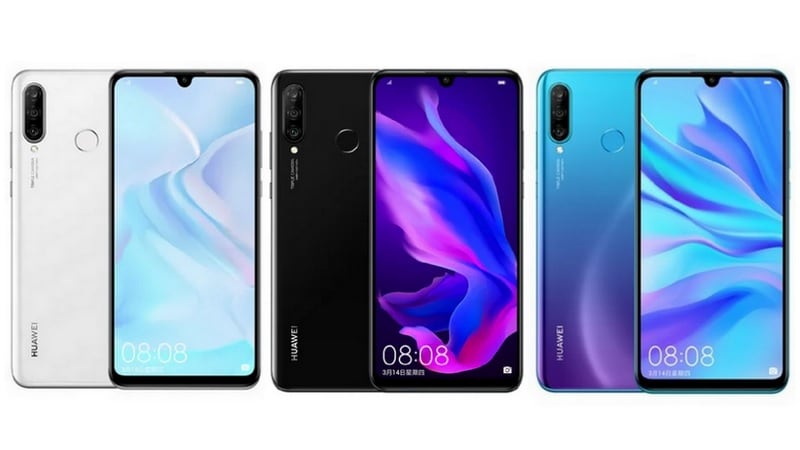 The Huawei Nova 4e will feature a 32-megapixel front camera

Huawei Nova 4e is all set to launch tomorrow, toting a 32-megapixel selfie camera, but it appears that leaks will spoil some of the surprises. Alleged press renders of the Huawei Nova 4e have popped up online just a day before its official launch, and they show the upcoming smartphone in three colours with one of them flaunting a gradient finish. As per the leaked renders, the Huawei Nova 4e will feature a triple rear camera setup and a small waterdrop notch up front.

Earlier this month, the Chinese smartphone maker confirmed that the Huawei Nova 4e will be launched on March 14, after teasing that it will feature a 32-megapixel front camera. The Huawei Nova 4e appears to be a watered-down version of the Huawei Nova 4 that was launched in December last year, but as per the freshly leaked alleged press renders, the Nova 4e's design will also be different from its more powerful sibling.

To start things off, the Huawei Nova 4e is shown sporting a waterdrop-style notch, unlike the Huawei Nova 4 that flaunts a hole-punch display. Moving on to the rear panel, the alleged press renders indicate that the Huawei Nova 4e will pack triple rear cameras while a rear-mounted fingerprint sensor is positioned beside the camera module. There is no word on the resolution of the imaging sensors or the software features that come alongside.

As for the design, the alleged press renders show the Huawei Nova 4e in Pearl White, Magic Night, and Garnet Blue colour options. The latter is shown flaunting a gradient design with blue and purple shades. The Huawei Nova 4e renders come courtesy of MySmartPrice, but there is no word on an estimated pricing or regional availability of the upcoming Huawei smartphone.

Talking about the specifications, the Huawei Nova 4e's recent Geekbench visit revealed that it will be powered by an octa-core processor clocked at 1.71 GHz. As per the smartphone's TENAA listing, the processor in question is the in-house Hi-Silicon Kirin 710 SoC that will be paired with up to 6GB of RAM. The Huawei Nova 4e will reportedly sport a 6.15-inch full-HD+ display and will draw power from a 3,240mAh battery. In the imaging department, the upcoming Huawei offering is tipped to pack 20-megapixel, 16-megapixel, and 2-megapixel sensors.

BJP Website Was Hacked for a Few Minutes, Says IT Minister Ravi Shankar Prasad
Marvel to Develop ‘What If’ Animated Anthology Series for Disney+: Report