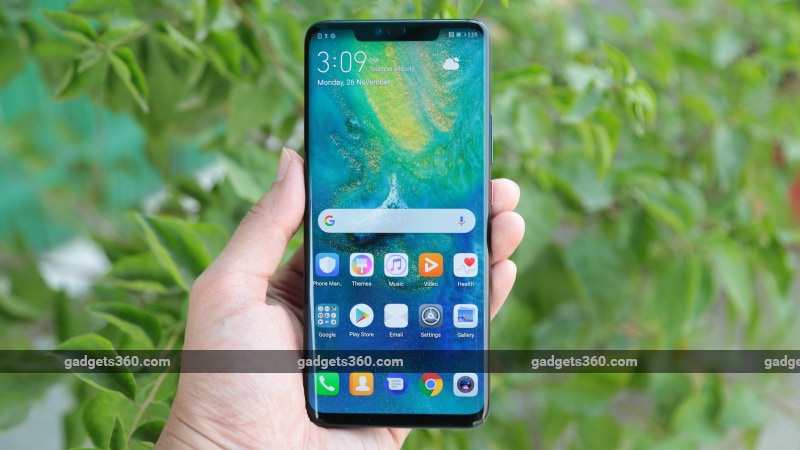 Huawei Mate 20 Pro was launched in India on Tuesday. The flagship smartphone's big features are its triple camera setup at the back, its full-screen display with a notch up front, and its 'Hyper Optical Pattern' textured back panel for better gripping. The Huawei Mate 20 Pro is powered by the latest and greatest 7nm Kirin 980 SoC, and also sports a dedicated neural processing unit (NPU) for efficient AI based functions. Another big highlight is that the smartphone runs on EMUI 9.0, based on Android 9.0 Pie, out-of-the-box. The Huawei Mate 20 Pro with its premium look and specifications, is set to compete with flagships like the Samsung Galaxy Note 9 and the iPhone XS Max in India.

The Huawei Mate 20 Pro price in India is set at Rs. 69,990 for the 6GB RAM + 128GB storage model. Huawei has unveiled a bundle offer where the Sennheiser PXC 550 wireless headphones are bundled at Rs. 71,990 - this is said to be an early bird limited offer. The smartphone will be available exclusively on Amazon India from midnight, December 3 for Amazon Prime members, and midnight December 4 for regular customers. As for offline, it will become available via Croma stores from December 10, and the bundle offer will be made available there as well. It will be available in the Emerald Green and Twilight colour variants. To recall, at its Europe launch last month, Midnight Blue, Pink Gold, and Black options were also unveiled.

Launch offers include a telecom partner offer from Vodafone Idea, with a 20 percent bill rental discount per month for 12 months on Red/ Nirvana postpaid rental plans of Rs. 499 and above. Vodafone Idea customers can also avail 1.1 GB data per day for 12 recharges/ months for recharges worth Rs. 199.

The smartphone sports a display notch up front and a tiny chin at the bottom of the display. It comes with a 'Hyper Optical Pattern' textured glass back for better grip, and a triple rear camera setup for taking photos and videos. There's an in-display fingerprint scanner on board with Dynamic Pressure Sensing tech, and the bottom edge houses the hybrid SIM tray slots, and the USB Type-C port. The company is also touting the presence of wireless charging tech, including wireless reverse charging, on the smartphone, apart from IP68 certification for dust and water resistance that allows for submerging up to 2 metres for 30 minutes. It also comes with Dolby Atmos tech. The company is also touting the HiVision app, that provides AI based visual search and translation features.

The Mate 20 Pro sports a Leica triple rear camera setup similar to the Huawei P20 Pro. There's one primary 40-megapixel primary wide angle lens with f/1.8 aperture, a 20-megapixel ultra-wide angle sensor with f/2.2 aperture, and a third 8-megapixel 3X telephoto lens with f/2.4 aperture. These sensors are coupled with LED flash and Super HDR. Features like AI Portrait Shot (that retains colour on the subject in a photo, and desaturates the background), and AI Cinema Mode (offers a 21:9 aspect ratio), and AI video editor (automatically creates video highlights for each person in a video), are being touted. There is a 24-megapixel RGB selfie camera at the front, and it's a 3D depth sensing camera with support for 3D facial unlocking (uses 30,000 recognition points). It also comes with 3D Live Emoji, with support for GIF and MP4 files.

The smartphone packs a 4,200mAh battery under the hood, with support for the same 40W SuperCharge support. The company claims that the smartphone can charge to up to 70 percent in 30 minutes. As mentioned, Mate 20 Pro also exclusively gets 15W fast wireless charging support, and also comes with the "world's first wireless reverse charging" technology on a smartphone. In terms of connectivity, the handset offers 4G LTE, Wi-Fi 802.11ac, Bluetooth v5.0, GPS/ A-GPS, and a USB Type-C port.