Huawei Mate 20 Pro is receiving a software update over-the-air (OTA) that brings several improvements, as well as a recent Android security patch, as per user reports. Apart from camera and face unlock improvements, the update is also said to bring the December security patch alongside. Last month, an update brought along face unlock optimisations, and this month's update also brings along more fixes related to face unlock security. The update should now be rolling out across markets where the phone has released. Let's check out the changelog and other details of the software update.

GSMArena was tipped off about the Huawei Mate 20 Pro update, and a screenshot shows the changelog. It vaguely states that the update optimises face unlock performance in certain scenarios, and also brings along the December security patch. The update also optimises the photo quality while in Master AI mode to make it the colour reproduction look more natural and authentic, and has also fixed an issue where the preview and actual photos differed. We've reached out to Huawei for confirmation about the update's rollout, and will update this space when we hear back. 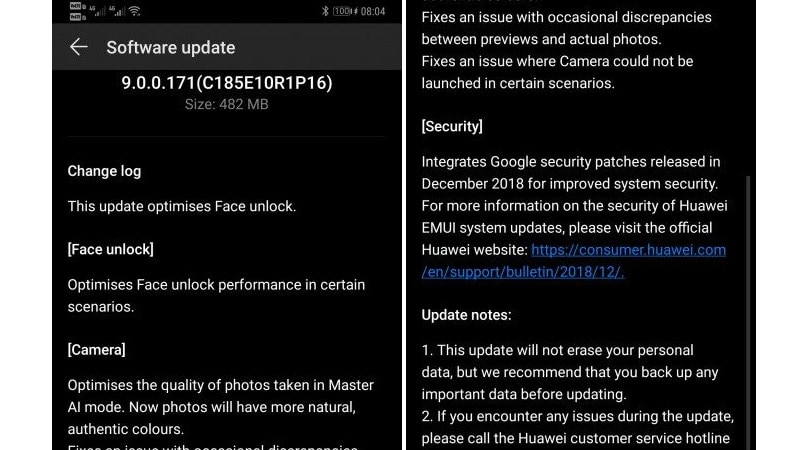 There was also a camera app launch issue in certain scenarios, and that has been fixed with the latest update. Apart from this, critical bug fixes and performance improvements were a part of this update. The latest update reportedly comes with version number 9.0.0.171 (C185E10R1P16) and is said to be about 482MB in size.

As mentioned, the Huawei Mate 20 Pro update will roll out in the form of an OTA download. In case you haven't received a notification, you can manually check for it by going into Settings > System > System update. Let us also know if you see any other changes after installing the update, in the comments section below.