Chinese telecommunication giant Huawei unveiled the Mate 20 Lite smartphone and a new smart speaker cum Internet router, dubbed the AI Cube, at IFA 2018 in Berlin. The flagship Kirin 980 SoC was also launched at the trade show. Successor to last year's Huawei Mate 10 Lite, the Mate 20 Lite comes with features including the latest HiSilicon Kirin 710 SoC, a 19.5:9 display with a notch, dual cameras on both front and back, and certain AI capabilities. On the other hand, the AI Cube features Amazon's Alexa virtual assistant and can also act as a router if the need arises. At the IFA 2018 event, Huawei also unveiled the Huawei Locator, a compact GPS tracker with long operational and standby times.

Huawei Mate 20 Lite price has been set at GBP 379 (roughly Rs. 34,800) across Carphone Warehouse and Vodafone retail stores in the US starting September 5, in Black, Platinum Red, and Sapphire Blue colour options. It will also be available at EE stores starting October. Following that, availability will ensue at Tesco and Argos. AI-supported features on the Mate 20 Lite include AI Shopping Assistant, AI noise cancellation, AI smart gallery, and more. 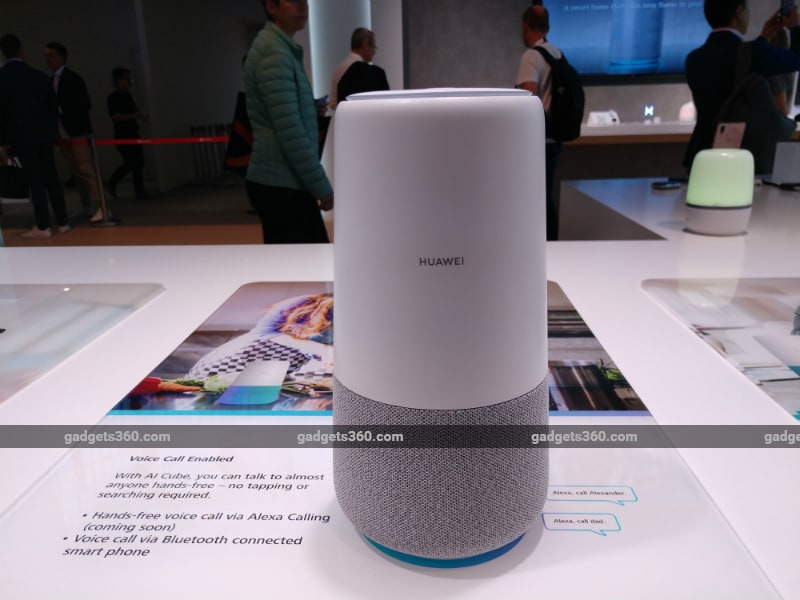 The smart speaker also acts as an Internet router and comes with Wi-Fi 802.11ac with support for both the 2.4GHz and 5GHz bands, offering support for up to 1200Mbps. With a 4G SIM, it supports speeds of up to 300Mbps. It will reportedly be released in Europe before this year's holiday season. Pricing hasn't been revealed yet.

Huawei Locator
Apart from these two major announcements at IFA 2018, Huawei also unveiled the Huawei Locator, a nifty GPS tracker that will reveal GPS coordinates for use in times of an emergency. In terms of connectivity, the Locator includes GPS, A-GPS, GLONASS, Galileo, Beidou, Wi-Fi assisted positioning, and real-time position reporting. It is IP68 water and dust resistant. The GPS tracker has a geofence of 50-2,000 meters and comes with an SOS button. Pricing and availability details are yet to be announced.