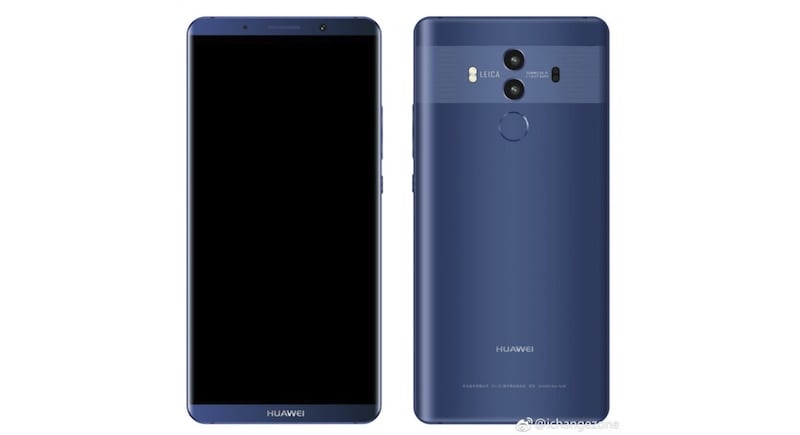 More details about Huawei's supposed upcoming flagship smartphones - the Huawei Mate 10 and Huawei Mate 10 Pro - have surfaced online ahead of a confirmed media event from the company on October 16, where it is expected to unveil the new smartphones.

The Huawei Mate 10 Pro will feature a near bezel-less display with 18:9 ratio, according to what appears to be press renders that leaked on Chinese social media platform Weibo. The Huawei Mate 10 is expected to retain the same 16:9 ratio as its immediate predecessor.

Press renders also suggested that the Huawei Mate 10 Pro will feature a setup of dual rear camera sensors on the back of the device. A fingerprint scanner was also spotted on the back of the phone, giving away how Huawei is implementing authentication feature as it uses more real estate of the front side for display. The Huawei Mate 10 Pro also appeared to have either metal unibody design, or metallic body.

Separately, what appears to be a promotional poster of the Huawei Mate 10 also surfaced on Chinese news outlets this week. According to the document, the Huawei Mate 10 will feature a 6.2-inch display with a screen resolution of 2160 x 1080 pixels - this contradicts the earlier leak that the smartphone will sport a standard 16:9 display. It is expected to feature a 20-megapixel and a 23-megapixel dual camera sensors on the back with Leica branding and a 4,000mAh battery to keep the phone running. The handset will be powered by company's homegrown Kirin 970 SoC. The phone could come in as many as four variants, and it will be launching on October 16, the promotional material suggested.