Huawei has announced that it's bringing EMUI 9 based on Android Pie to a list of devices. The devices include the Huawei Mate 10, Mate 9, Mate RS, Mate 20 Lite, P20, P10, and Nova 3 alongside their multiple variants and models. The Chinese company has notably made the new announcement months after confirming the EMUI 9 rollout for the Huawei P20 Pro, P20, Mate 10 Pro, Mate 10, Honor Play, Honor View 10, and the Honor 10 back in December last year. Separately, the Huawei Watch GT is found to have received a new firmware release that brings the anticipated Always on Display option.

As officially announced through a tweet, EMUI 9 is reaching the Huawei Mate 10 series, Mate 9 series, P20 series, P10 series, Nova 3 series, Mate RS, and Mate 20 Lite. The company has also claimed that it has already provided Android Pie-based EMUI 9 to 80 million users globally and is aimed to hit the mark of 100 million users in the first half of this year.

Given the ongoing tussle between Huawei and the US government, EMUI 9 may be the company's last Android-based release for many of its smartphones, though we hope things turn around for the compnay. Nevertheless, the company also in April revealed that it is testing EMUI 9.1, which is the successor to EMUI 9. The custom ROM is already running on the Huawei P30 Pro and is expected to reach the Mate 20-series models soon. Android Q Beta is also available for the Huawei Mate 20 Pro, shortly after being pulled alongside the Mate X and P30 Pro.

Back in December, Huawei announced the EMUI 9 rollout for models including the P20 Pro, P20, Mate 10 Pro, and Honor Play among others. The ROM brings features such as HiVision visual search, GPU Turbo 2.0, and PC Mode.

Alongside the expansion of EMUI 9, the Huawei Watch GT is reportedly receiving a new software update that brings the Always-On Display option. A user on Reddit has posted a screenshot to report the rollout. The update brings firmware version 1.0.8.34 and is 3.2MB in size. 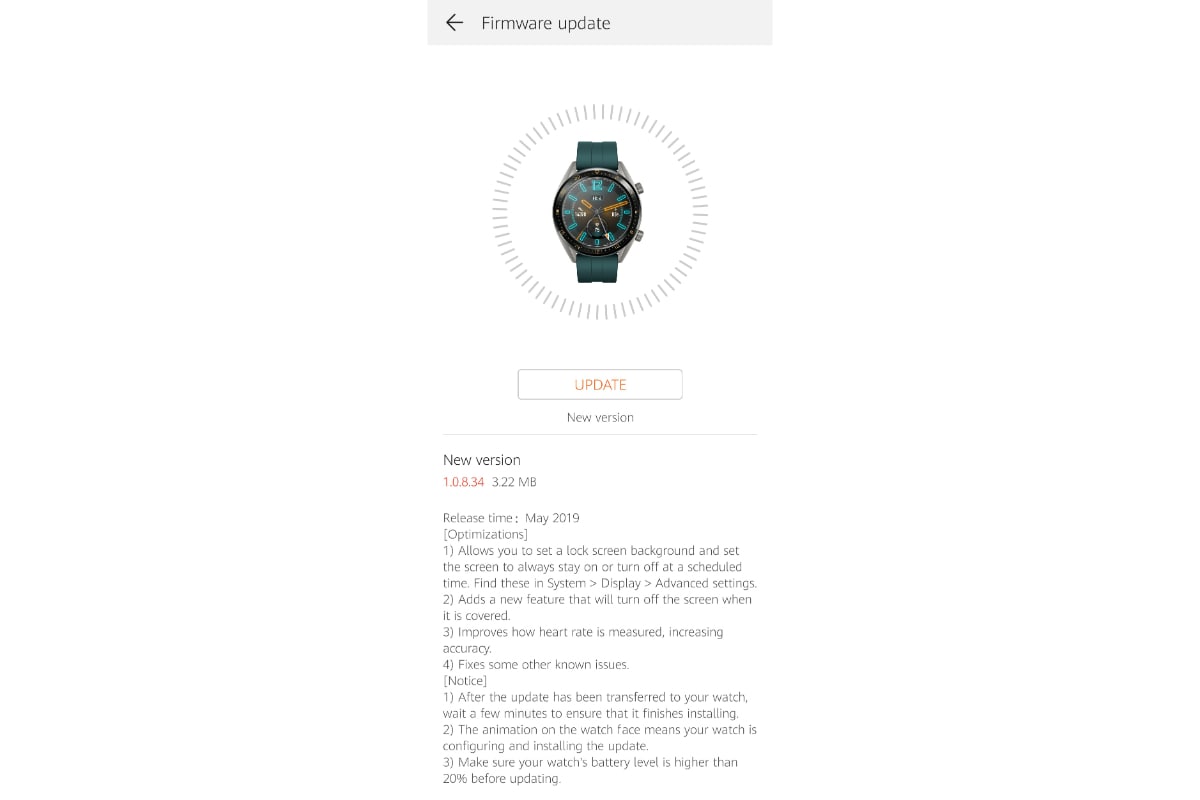 To enable the Always-On Display feature after installing the update, you need to go to System > Display > Advanced settings from the companion app. The latest software version also brings improvements to the heart rate monitoring of the smartwatch. Furthermore, the update fixes various known issues.