Huawei's anticipated Nexus smartphone appears to have had its specifications detailed thanks to a leaked benchmark test result.

According to a Geekbench listing, the Huawei Angler, widely expected to be the Nexus smartphone, runs Android 6.0 Marshmallow alongside featuring a Qualcomm Snapdragon 810 processor.

The listing (via Mydrivers) also tips 3GB of RAM and a clock speed of 1.55GHz for the Huawei Nexus smartphone. Notably, all the specifications tipped by the benchmark listing are in line with previous leaks.

Some of the other details tipped for the Huawei Nexus smartphone include 64GB of inbuilt storage and a 5.7-inch display alongside front-facing speakers. The Huawei-made Nexus smartphone has also been previously rumoured to pack a fingerprint scanner. 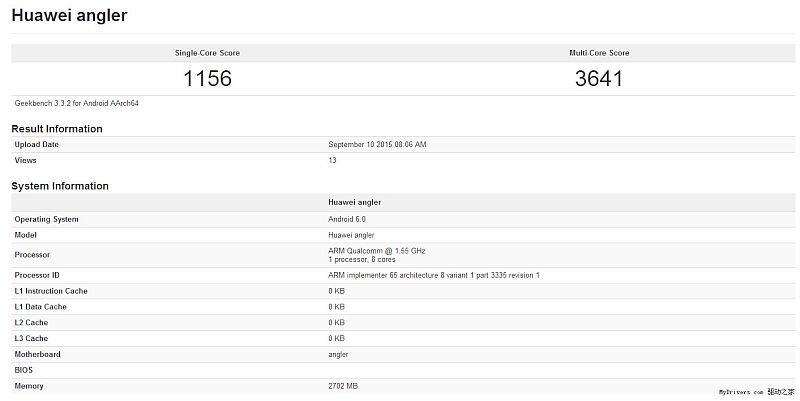 An earlier report had also claimed that the Huawei-made Nexus might feature a USB Type-C port. The inclusion of USB Type-C support does not come as a surprise however, with the new Nexus smartphones meant to be the platform lead devices for Android 6.0 Marshmallow, and Google officially announcing support for the USB specification at I/O 2015.

Last month, new images claiming to show Google's upcoming Nexus smartphone made by Huawei surfaced on the Internet. The leaked images showed the rear camera placed on a bump that stretched along the entire width of the back panel. The primary camera was placed on the top-left side with slightly protruding glass panel on the top. It was also seen accompanied by a dual-LED flash module, but no laser autofocus sensor was seen in the leaked image.

Both Huawei and LG-made Nexus smartphone are said to launch on September 29 and are likely to go up for pre-orders in October.