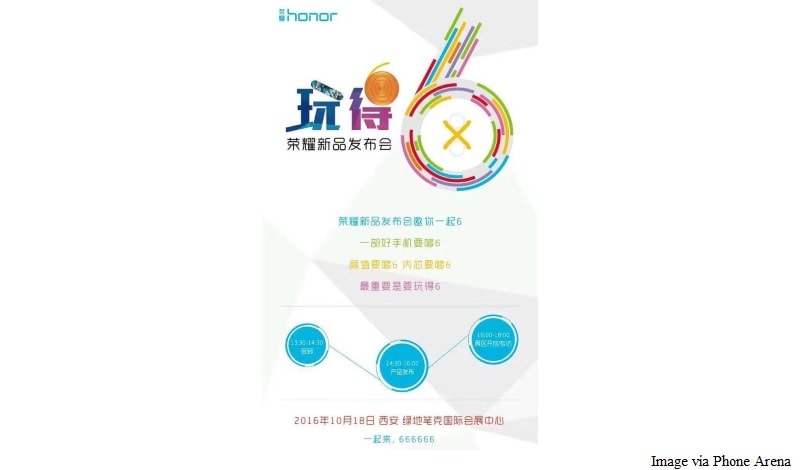 Huawei has started sending out invitations for the launch event of its Honor 6X smartphone on October 18, a day ahead of the launch of upcoming Oppo R9s.

As per the Tenaa listing of the Honor BLN-TL10 smartphone, said to be the Honor 6X, it will sport a 5.5-inch display. Huawei Honor 6X is expected to be powered by a HiSilicon Kirin 650 SoC and coupled with 3GB of RAM. The device is expected to come with inbuilt storage of 32GB which will likely be expandable with microSD card. The smartphone is tipped to be running Android 6.0 Marshmallow out of the box.

The Huawei Honor 6X is expected to have a 3340mAh battery. The Tenaa listing of the phone suggests that the smartphone will don a dual camera setup at the back with two 12-megapixel cameras. It will also have a 2-megapixel camera at the front for video-chatting or taking selfies.

It is expected to be priced around $200 (roughly Rs. 13,300) and will likely be presented as a mid-range device by the company.

Huawei earlier confirmed that it will be launching its smartphone Honor 8 in India at its press event on October 12. The company will be revealing the pricing and availability details regarding the phone at its event. Honor 8 sports a 5.2-inch full-HD (1080x1920 pixels) LTPS LCD display and is powered by a 1.8GHz Kirin 950 octa-core processor with 3GB or 4GB RAM configurations.