Huawei strengthened its dominance of the world's biggest smartphone market even as it was all but banned by the US.

Huawei smartphones made up 41.5 million of the 97.8 million shipped in Q3 2019, according to Canalys

Huawei Technologies lifted its share of China's smartphone market to a record 42 percent, with third-quarter shipments rising by two-thirds as domestic consumers rallied behind it after US sanctions, data released on Wednesday showed.

Huawei strengthened its dominance of the world's biggest smartphone market even as the Chinese company was all but banned by the United States in May from doing business with American companies, significantly disrupting its ability to source key parts.

The world's No. 2 maker of smartphones was granted a reprieve until November. Nevertheless, promotions and patriotic purchases have driven Huawei's smartphone sales in China, helping it more than offset a shipments slump in the global market.

While the Chinese smartphone market still contracted by three percent in the third quarter compared to a year earlier, Huawei smartphones made up 41.5 million of the 97.8 million shipped in the period, according to data from market research firm Canalys. 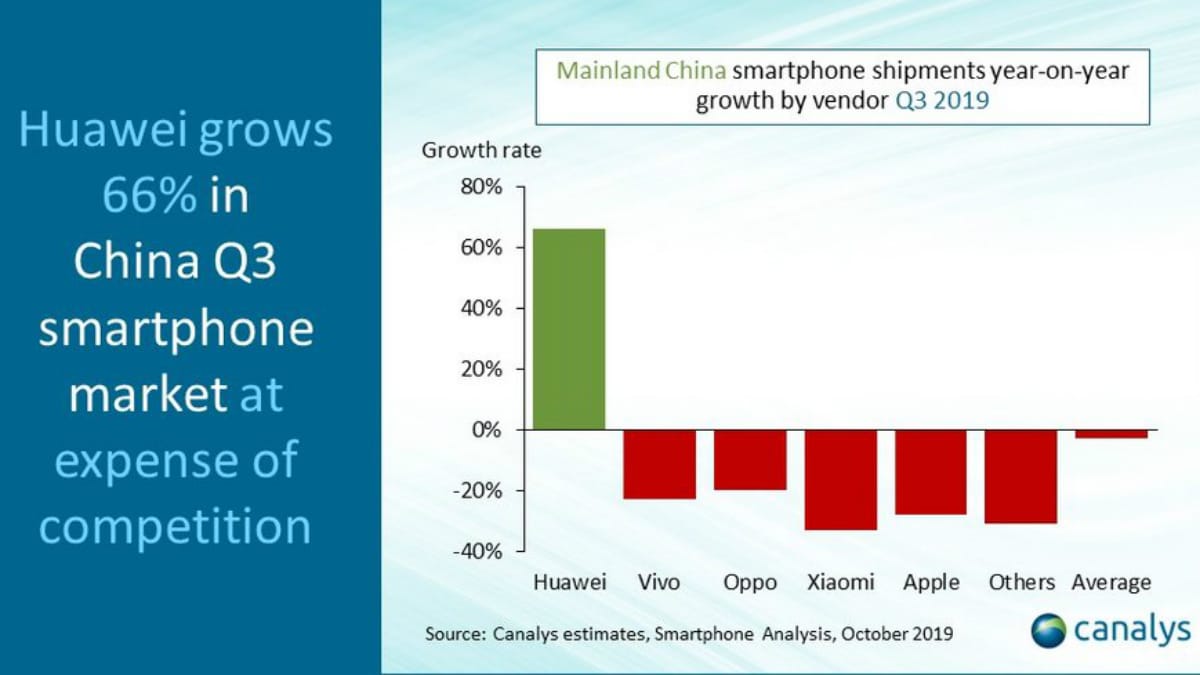 "Huawei opened a huge gap between itself and other vendors," said Nicole Peng, Canalys vice president of mobility. "Its dominant position gives Huawei a lot of power to negotiate with the supply chain and to increase its wallet share within channel partners."

Huawei's growth came at the expense of main rivals Oppo, Vivo, Xiaomi, and Apple, which together accounted for 50 percent of the market in the third quarter, down from 64 percent a year earlier.

However, she added that Apple received a boost from the launch of the iPhone 11 in September, with customers willing to wait two to three weeks to receive shipments of the newer models.

The company's profits remain resilient despite pressure from the United States, with revenue jumping 27 percent in the third quarter.

Its flagship Mate 30 Pro 4G version, which Huawei unveiled in September, was not a big factor in its Q3 success, Canalys said, with most people waiting for the 5G version to launch later this year.

"Huawei is in a strong position to consolidate its dominance further amid 5G network rollout, given its tight operator relationships in 5G network deployment, and control over key components such as local network compatible 5G chipsets compared with local peers," said Canalys' Peng.

"This puts significant pressure on Oppo, Vivo and Xiaomi, which find it very hard to make any breakthrough."