Huawei Band 6 can offer up to two weeks of battery life and has 96 workout modes. 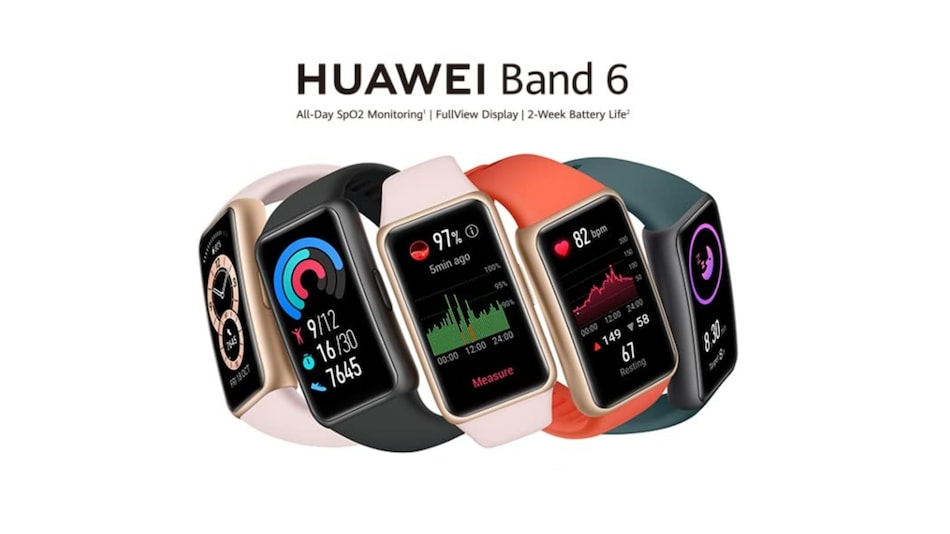 Huawei Band 6 price in India has been revealed via Amazon, and the wearable is expected to be launched in the country soon. The smart band has already made its debut in Malaysia earlier this year. Huawei Band 6 sports an AMOLED display and is claimed to offer up to two weeks of battery life. It allows users to monitor their heart rate, sleep, SpO2 (blood oxygen saturation), as well as stress. The wearable also comes with women's health tracking feature. Huawei Band 6 also offers 96 workout modes.

Huawei Band 6 price in India is set at Rs. 4,490, as per a banner on Amazon. The wearable will be launched in four colour options — Graphite Black, Forest Green, Sakura Pink, and Amber Sunrise. Those who are interested in purchasing the wearable can click the “Notify Me” button on the wearable's dedicated microsite to stay updated with the developments regarding its launch and availability.

Meanwhile, Huawei has also said in a tweet that interested customers can now pre-book Huawei Band 6 and get a free gift. However, it hasn't provided any link to pre-book the device on Amazon and its official website. The Chinese company launched the smart band in Malaysia back in April.

Huawei Band 6 specifications have been revealed by the microsite on Amazon. It features a 1.47-inch AMOLED Full-View (194x368 pixels) colour display with a 64 percent screen-to-body ratio, and 282ppi pixel density. The screen of Huawei Band 6 is touted to be 148 percent larger than its predecessor Huawei Band 4. It is also claimed by the company to have 42 percent larger screen-to-body-ratio, that essentially makes space for more exercise stats and detailed heart rate monitoring, Huawei says. Additionally, the smart band also supports watch faces that can be accessed through the Huawei Watch Face Store.

The wearable has skin-friendly UV-treated and dirt-resistant silicone straps. Huawei Band 6 can offer up to two weeks of battery life with typical usage, and up to 10 days with heavy usage. Huawei claims that a quick 5-minute charge can deliver up to two days of battery life.

Huawei Band 6 is 5ATM (up to 50 metres) water resistant, supports Bluetooth v5, and has a side button for navigation support. It is compatible with phones running Android 6.0 or later and iOS 9.0 or later. It measures 43x25.4x10.99mm.