The Huawei Ascend G610 runs Android 4.2 with the company's Emotion UI on top. It is a dual-SIM handset with GSM+GSM support. The smartphone features a 5-inch IPS qHD (540x960 pixels) display and is powered by a 1.2GHz quad-core processor and 1GB of RAM. It comes with 4GB of inbuilt storage, which is expandable up to 32GB via microSD card. The mid-range Huawei Ascend G610 sports a 5-megapixel rear camera alongside an LED flash and also includes a 0.3-megapixel front-facing camera. It also includes sensors like G-sensor, light sensor and digital proximity. The Ascend G610 comes in two colours - Black and White. It packs a 2150mAh battery and has dimensions of 142x73.6x9.9mm.

The Huawei Ascend G700 on the other hand, runs Android 4.2 Jelly Bean with Huawei's Emotion UI on top. It is also a dual-SIM device with support for GSM+GSM. The smartphone comes with 5-inch IPS display with a 720x1280 pixel resolution. It is powered by a 1.2GHz quad-core processor and has 2GB of RAM. It comes with 8GB inbuilt storage and can be expanded up to 32GB via microSD card. It bears an 8-megapixel rear camera accompanied by an LED flash and also houses a 1.3-megapixel front camera. The Ascend G700 is powered by a 2150mAh battery. 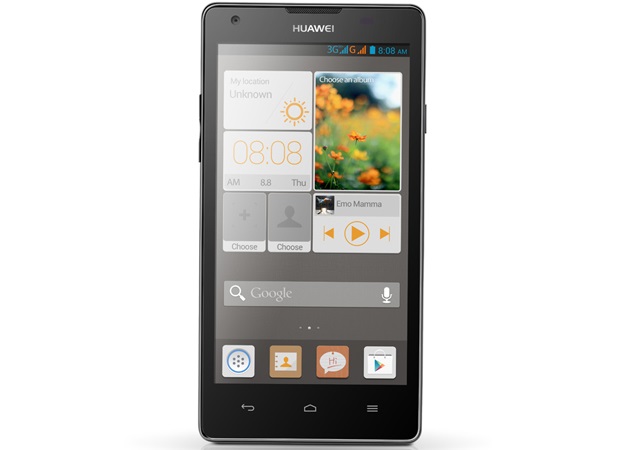 The Huawei Ascend Y320 is a dual-SIM (GSM+GSM) device which runs Android 4.2 Jelly Bean. It comes with a 4-inch (480x800 pixels) WVGA display. The Ascend Y320 is powered by a 1.3GHz dual-core MediaTek MT6572 processor with 512MB of RAM. The smartphone comes with 4GB inbuilt storage, which is further expandable up to 32GB via microSD. It sports a 2-megapixel rear camera, while there is no secondary camera. On the connectivity front, the Ascend Y320 includes 3G, Wi-Fi, Micro-USB, and Bluetooth. The smartphone packs a 1350mAh battery, measures 123.3x63.2x11.1mm and weighs about 123 grams.

Lastly, the Huawei Ascend Y511 comes with 4.5-inch FWVGA (480x854 pixels) display. Much like the Ascend Y320, the Ascend Y511 is also powered by a 1.3GHz dual-core MediaTek MT6572 processor with 512MB of RAM. The smartphone comes with 4GB of inbuilt storage which is expandable up to 32GB with the help of microSD card. It sports a 3-megapixel fixed-focus camera and also includes a 0.3-megapixel front-facing camera. There is a 1730mAh battery onboard.

Commenting on the launch, Victor Shanxin, President, Huawei Devices India, said, "At Huawei, we are building a broad portfolio of products catering to the varied taste of consumers. We understand that India is a unique market wherein some consumers are price sensitive while others demand for quality and style in their mobile phones and our four different series of products reiterates our focus on providing smart devices at a smart pricing in India across different segments. Our four newly launched devices; two in the Y series and two in the G series will help us to reach a wide range of consumers in India."

Microsoft paying Samsung, Sony and others to make Windows Phone devices: Report
Google updates Chrome for Android and iOS, says it reduces data usage by half