As for the premium Huawei Nexus smartphone, the leaked renders (seen above) coming from USwitch website show the rumoured smartphone sporting metallic side bezels besides the USB Type-C port at the bottom. The rear camera of the smartphone is placed on the top-left side, unlike in the middle as seen on the leaked LG-made Nexus 2015 image.

Slightly protruding glass panels on the top and bottom are also said to be featured in the rumoured smartphone. Interestingly, the rear camera is only seen with a dual-LED flash module, but no laser autofocus sensor that was seen in the leaked image of the LG Nexus 2015. The fingerprint sensor and front-facing speakers are also present, as previously tipped. 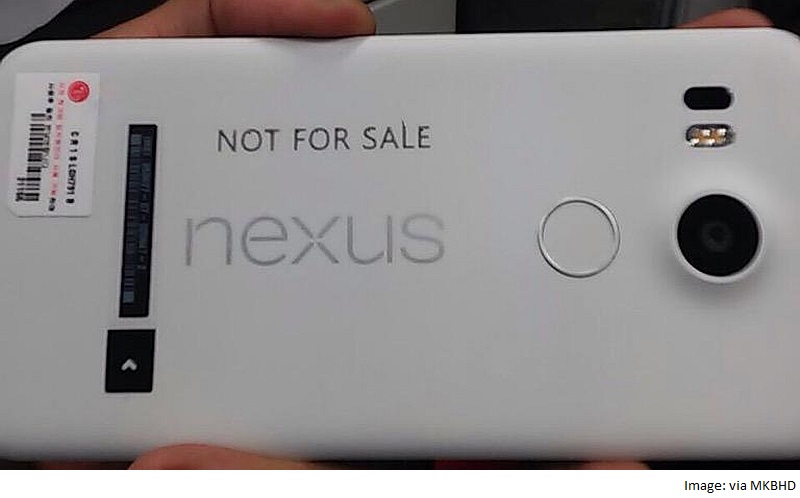 As for the anticipated LG Nexus smartphone, a live image tweeted (seen above) by YouTube sensation Marques Brownlee purportedly shows the rear panel of the handset. The White-coloured variant, as reported before, shows a fingerprint sensor on the back panel below the protruding camera with dual-LED flash, and what seems to be a laser autofocus sensor. A 'Nexus' logo is seen placed at the back panel below the fingerprint sensor, in a similar style as seen on the existing Nexus 5 model.

Some of the leaked details of LG Nexus smartphone, tipped to be called the LG Google Nexus 5 (2015), include a 5.2-inch display and dimensions of 146.9x72.9x8mm. A recent AnTuTu benchmark listing of the Google Nexus 5 2015 claimed a score of 85530, which was the highest in any handset we had seen until now. Last week, OnLeaks had claimed that the Huawei-made Nexus would feature a 5.7-inch display, front-facing speakers, will pack USB Type-C, possibly the 3.0 version, and also include a fingerprint scanner

It is not yet clear as to when exactly Google will make the anticipated two smartphones official. However, looking at the amount of leaks and now live images, the launches do not seem to be far away. Going by last year's schedule, where Google unveiled Android L at Google I/O 2014 in May and then launched the Nexus 6 alongside the official release of Android 5.0 Lollipop in October, the Mountain View giant is once again expected to launch the two new Nexus smartphones in October.