HTC U11 ‘Squeezable Phone’ Set to Launch in India on Friday 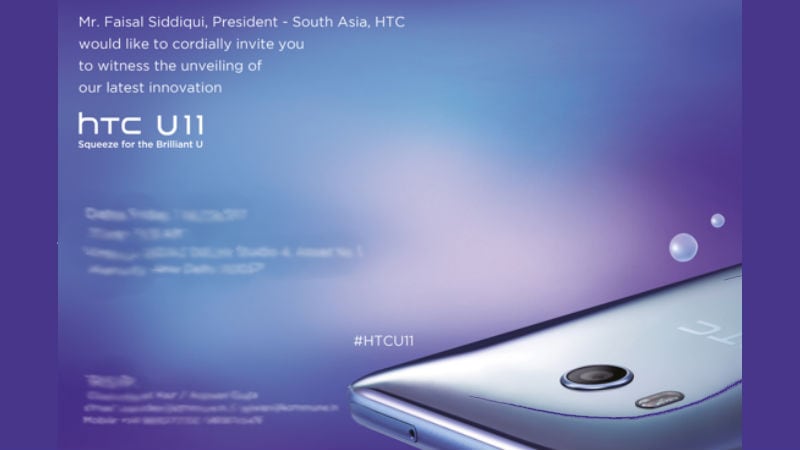 HTC has officially sent out press invites for the launch of the HTC U11 smartphone in India. The device is set to be launched at an event this Friday i.e. June 16. At the event, HTC will announce HTC U11 price in India and availability details the smartphone.

Last week, HTC listed the HTC U11 smartphone on its India website, hinting at an imminent launch. Now, with the press invite, HTC has confirmed the launch date of the HTC U11 in India. The HTC U11 smartphone was launched in Taiwan last month, and one of the biggest attractions of the device is its ‘Edge Sense’ feature which promises to bring a complete new way of interaction with the device.

The Edge Sense feature of the HTC U11 lets you launch the camera, and send texts. You can customise the squeeze gesture to open email, and even launch your favourite app or game. When users activate advanced touch mode, they can use a "short squeeze" as well as a "squeeze and hold" for even more functionality at your fingertips. The HTC U11 squeeze feature works while wearing gloves as well, as Edge Sense is based on actual pressure applied to the side of the device.

A recent leak also claims that India will get the 6GB RAM and 128GB storage variant of the HTC U11. Furthermore, it says that the phone will be made available in Amazing Silver, Sapphire Blue, Brilliant Black, Ice White, and Solar Red colour options. Just to recall, pricing of the HTC U11 starts at EUR 749 (roughly Rs. 53,000) for Europe, and in the US at $749 (roughly Rs. 48,000), where it's up for pre-order. Other countries where the HTC U11 is scheduled to launch include China, Taiwan, Malaysia, Singapore, Hong Kong, Russia, Saudi Arabia, and Philippines.

For specifications, the HTC U11 runs on Android 7.1 Nougat with the company's HTC Sense skin on top, and supports dual-SIM cards (Nano-SIM). It features a 5.5-inch Quad HD (1440x2560 pixels) Super LCD display with Corning Gorilla Glass 5 protection. Under the hood, it is powered by 2.45GHz quad-core Qualcomm Snapdragon 835 SoC. It also supports storage expansion via a microSD card slot (up to 2TB).