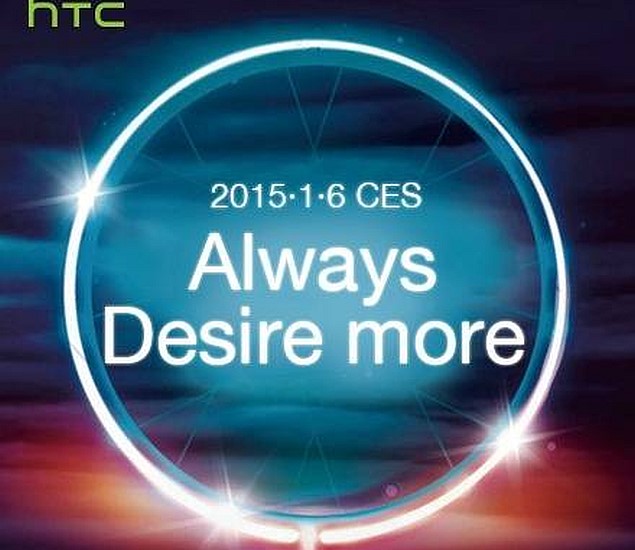 HTC has started sending invites for a CES press event on January 5 in Las Vegas, where it is now expected to unveil new Desire series smartphones, and not the rumored HTC One (M9) a.k.a HTC Hima.

The company posted the CES 2015 invitation poster image on its official Weibo account (via upleaks) that reads, "2015.1.6 CES Always Desire more", hinting towards Desire series devices to be announced at this event. The invite notably mentions two dates, though they are thought to be pointing to the same event occurring in different time zones (in Las Vegas and Taiwan).

Notably, a recent report had tipped HTC to launch the One (M9) or HTC Hima smartphone at CES 2015, though the latest official social media post seems to contradict this. The same source had also pointed to the purported specifications of the smartphone on AnTuTu benchmarks.

Last week though, HTC was tipped to launch the Hima aka One (M9) in March, alongside the anticipated Sense 7 UI on Android 5.0 Lollipop. This time period fits with HTC's regular flagship refresh cycle, with the Taiwanese firm launching its flagship smartphones in the month of March for the past two years.

While at this point of time it's not known that what devices the Taiwanese giant will introduce at CES, it was only last week when @upleaks had tipped the specifications of a mid-range smartphone, dubbed the HTC A12, which will feature a 64-bit processor.

Last week, HTC's North Asia President, Jack Tong, had said the firm would be expanding its 4G entry-level smartphone portfolio in the first quarter. The DigiTimes report citing Jack Tong had noted that HTC will stress on promotion of affordable HTC handsets over the Internet, similar to Xiaomi.

The report had added that Tong also expects that HTC handset shipments will grow by a double-digit rate next year.
Comments