Now more screenshots of Sense 5.0 have surfaced again, this time round spotted on a Droid DNA handset in China. A Sina Weibo user called LeakROMs has posted the image on the Chinese social network. The capacitive buttons are the same as seen before on the HTC M7 but there's a new Sense weather widget as well.

One can see that the homescreen is divided into various sections for news, social networking and so on. It sure looks like someone got their hands on the new Sense 5.0 and is out testing it on current devices.

Though we are yet to hear any official confirmation from the Taiwanese manufacturer, the leaks until now are indicative of the fact that the company is building the new UI from scratch. Earlier images revealed a new clock widget with the overall design of the interface looking fresh.

More users have posted screenshots on the XDA forum who claim to have got their hands on the latest UI. One such member called mdeejay at XDA has put up several screenshots of a supposedly stable build of Android 4.1.2 with Sense 5.0 running on the Verizon phone, as ported from a Sprint version of the rumoured M7. 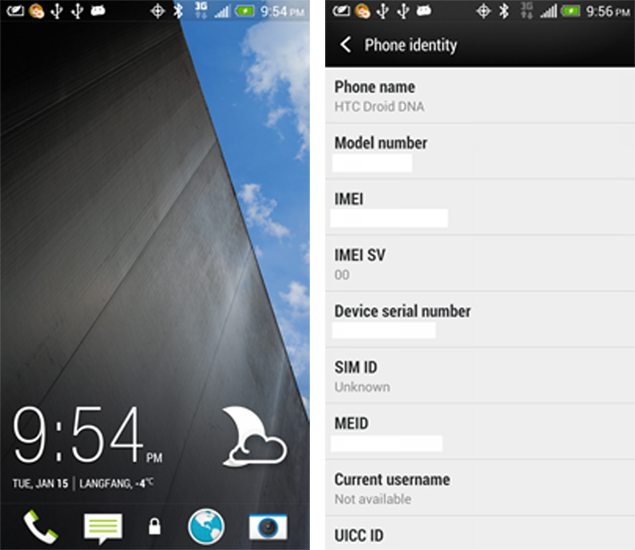 The HTC M7 is expected to be unveiled at the MWC next month in Barcelona. The specifications of the smartphone rumoured so far suggest that it comes equipped with a 4.7-inch 1080p display, a 13-megapixel rear snapper, a 1.7GHz quad-core processor and 2GB RAM.

As far as looks are concerned, the device is rumoured to sport a design similar to the HTC Droid DNA with an all-black shell and a "very nice looking beveled edge" along the screen.

Earlier this month, leaked images of the smartphone showed the HTC M7 running Sense 5.0 and of what perhaps might be the new lockscreen. An earlier image posted by Pocketnow depicted that HTC may have gotten rid of the ring and introduced a swipe-based gesture instead to unlock the screen.
Comments