But that's not all. In the background, you can see flashes of the HTC device being teased. Though there isn't much information that you can gather out of the series of videos, but they certainly seem to be in line with the recently leaked image of the device. what still remains unclear is whether the device will be known as the M7 to the HTC One.

The recent image made available by @evleaks revealed that the device sports a thin bezel, identical speaker grills on the top and bottom, with the top also having two noise-cancellation microphones on the left and the front-facing camera on the right. The phone apparently features curved corners on what looks like an all-metal body. The image also showed the new Sense 5.0 UI, that has also been a victim of multiple leaks in the past.

Speaking of the sense 5.0 UI, Phone Arena has received an image of the HTC Sense 5.0 UI running on what seems to be the HTC G2. Looking at the image, the upcoming lower-end HTC G2 seems to reconfirm Sense 5′s new design. It looks clean and simplified like we've seen in the past. 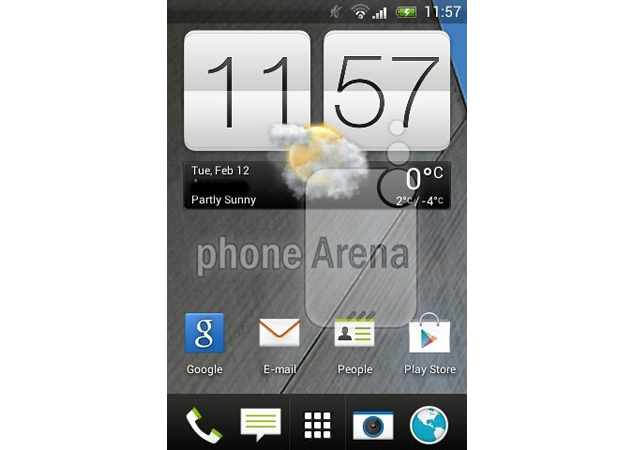 News of the HTC G2 first appeared alongside the M7's confirmation from CEO Peter Chou. The HTC G2 is expected to be an entry-level device with a 3.5-inch screen with HVGA display, 512MB RAM and a 5-megapixel camera. This smartphone is touted to have a 1GHz processor and run on Android 4.0 (Ice Cream Sandwich).

Reports have also cropped of another HTC device codenamed M4, that is likely to be premium smartphone with a 1.2GHz dual-core Snapdragon SoC running Android 4.2 (Jelly Bean), along with Sense 5.0, a 4.3-inch screen which supports resolution of 720p, 2GB of RAM, 32GB of internal storage and a 13-megapixel rear shooter. Furthermore, it will support LTE.

As far as the HTC M7 goes, this isn't the first time we're seeing the device leak in a video. The rear and middle housing parts of the device were spotted late last month in 5 min 30 seconds video, where it was compared to the company's very own Droid DNA and HTC One X.

The HTC M7 aka HTC One is rumoured to come with a 4.7-inch 1080p SoLux display and is expected to be powered by a 1.7GHz quad-core processor display alongside 2GB RAM. It is said to feature a 4.3 'ultrapixel' rear camera and run on Android 4.2 skinned with a layer of the brand new Sense 5.0 UI. The device is expected to start selling in UK from March 8.
Affiliate links may be automatically generated - see our ethics statement for details.
Comments