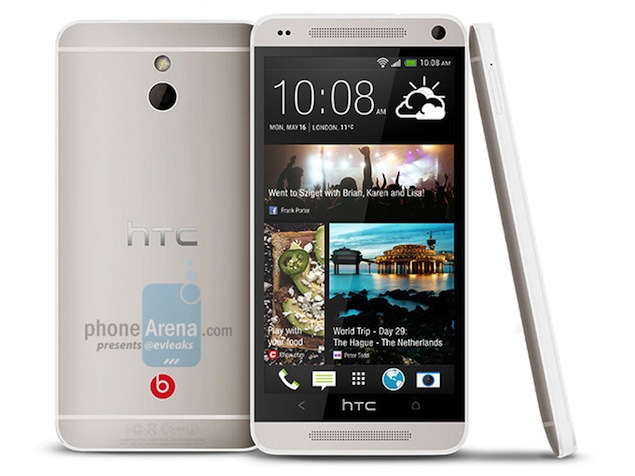 A cheaper version of HTC's critically acclaimed flagship phone, HTC One, has surfaced online. Codenamed, M4, the mid-range variant of the phone follows the same design language that we've seen in the One, although it's not known if it will also use the same materials. It also features two speaker grills on the front and comes with Beats audio.

The images of the phone were brought to public domain by the notorious Evleaks who also informs that the phone would sport a 4.3-inch 720p screen, and will be powered by a dual-core processor, unlike the One's quad-core CPU. It will have 2GB RAM and the same Ultrapixel camera that featured in the HTC One (Review | Pictures).It will house a 1700mAh non-removable battery and offer 16GB of internal memory.

The report indicates that the phone will ship towards the end of the second quarter with Android 4.2 Jelly Bean.

It's not the first time that the existence of the M4 has been suggested. In February, with the M7 or HTC One leaks, Evleaks had indicated that HTC was working on two other phones, namely the M4 and G2. Evleaks had said that the M4 was a premium smartphone, which would be one notch below the HTC M7 and will come with a 1.2GHz dual-core Snapdragon SoC running Android 4.2 (Jelly Bean), along with Sense 5.0. He had also confirmed the other specifications including LTE support. The G2 meanwhile is rumoured to be an entry-level device with a 3.5-inch screen with HVGA display, 512MB RAM and a 5-megapixel camera. This smartphone is touted to have a 1GHz processor and run Android 4.0 (Ice Cream Sandwich).

Evleaks' leaks have mostly turned out to be reliable, so it's likely that we might hear about the new phone from HTC soon. It will be interesting to see HTC follow Samsung's footsteps and introduce mid-range variants of flagships. Samsung is reportedly going to launch the Galaxy S4 mini, a mid-range variant of its flagship smartphone, Galaxy S4.
Comments