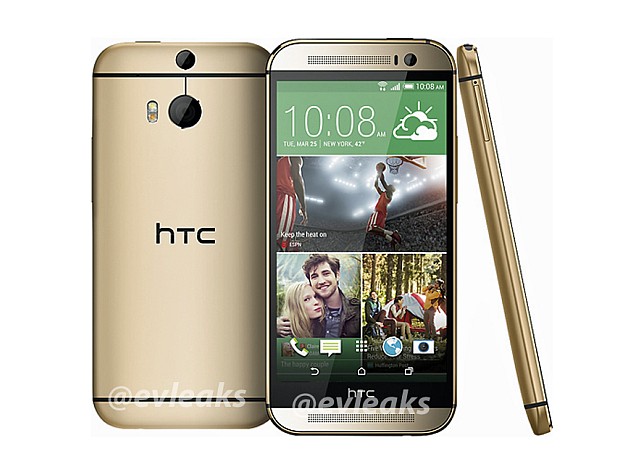 HTC's much talked about successor to the HTC One flagship, the HTC M8/ HTC One 2 or HTC One 2014, has finally been leaked online in what seems like an official press shot, along with a new name - The All New One.

The leak, coming via a Twitter post by @evleaks, arrived right after the previous image leak of the HTC M8 in a protective over case by the popular smartphone tipster, showing what looks like the HTC Sense 6.0 UI integrated with Android KitKat 4.4 OS on the screen. Gold and Silver colour options were also tipped.

The latest leaked image shows the front, back and left side of a Gold HTC M8 (aka The All New One), along with the screen running the rumoured Sense 6.0 UI. The front side also confirms the dual front speakers along with a front-facing camera supported by a flash. The back side however, comes with a camera and a dual-tone LED flash support along with what looks like a fingerprint sensor at the top.

If the image leaked by @evleaks is said actually of the HTC One's successor, it would be a little disappointing for users as it looks like The All New One will come with more or less the same overall design as seen on HTC One.

The Taiwanese smartphone maker will also be skipping the upcoming Mobile World Congress 2014 event, scheduled to start in Barcelona from 24 February, and will instead be holding an event in London and New York on 25 March 2014.

It is being speculated that the Taiwanese firm's much-anticipated successor to the HTC One, the device also known as HTC M8, HTC One 2, HTC One+, HTC Two, and HTC One 2014, will be released at the 25 March event.

The HTC M8 is rumoured to feature a 5-inch screen with a QHD (1440 x 2560 pixel) resolution display. The report also points to the HTC One's successor using the same UltraPixel technology, which was previously seen in HTC One.