HTC appears to have started rolling out over-the-air (OTA) the Android 4.4.4 KitKat update for its One (M8) users in India. The update is reported to bundled along with the HTC Eye Experience suite, just the like the update was rolled out last month in Europe.

The over-the-air update for HTC One (M8) is said to be sized at 288.45MB, as per a user report (via AndroidOS). Users can keep a check on availability of the OTA update by navigating to Settings>About Phone>Software Update on their phone.

The Android 4.4.4 KitKat update for the HTC One (M8) includes HTC Eye Experience, the new mobile imaging software which was released on the HTC Desire Eye in October. Beyond describing the new features HTC Eye Experience will bring, HTC has not detailed the new Sense UI features and other changes that come along with the update in the changelog (seen in the user's screenshot). 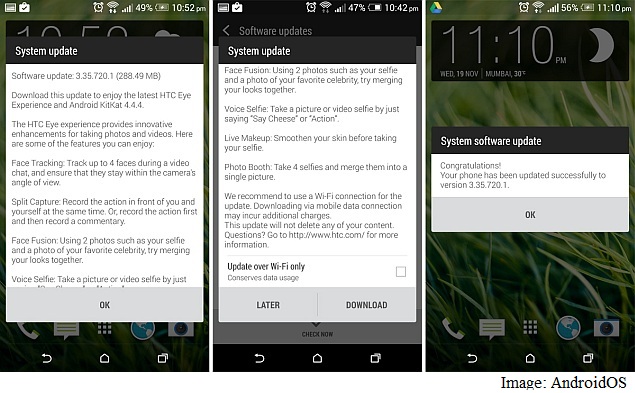 Some of the notable features of the HTC Eye Experience include a new Split Capture function that allows simultaneous images or videos taken from the front and back cameras to be combined into one split-screen image or video; Crop-Me-In, which allows a user to crop an image or video taken with the front-facing camera and superimpose it within a scene captured by the main camera; Voice Selfie lets users click images from the front camera by just using voice commands; Face Fusion technology, which allows users to merge two faces into an image, and Live Makeup, an option to beautify selfies.