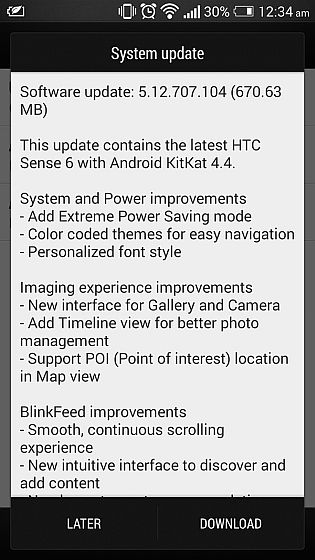 HTC's Sense 6 UI, which debuted in the recently launched smartphone the HTC One (M8), has started rolling out to the original HTC One, or One M7, as reported by users in India. While the update is said to be currently available for the single-SIM variant only, the dual-SIM variant's update might not be far behind.

The update is available over-the-air and is sized at 670MB. Users can simply navigate through their HTC One's Settings > About Phone > Software Update option to keep a check. It's worth noting that HTC One users who are using the Android KitKat OS will be the only ones who will experience the Sense 6 UI. To recall, HTC rolled out the Android 4.4 KitKat OS update for its One M7 handset back in February.

This update goes in line with what we reported in April when HTC announced the roll-out of Sense 6 UI to HTC One users. The announcement was made on Twitter by the HTC America president Jason Mackenzie.

"Reminder that Sense 6 will push to current HTC One (Review) users by end of May. #htcadvantage" wrote Mackenzie.

Last week it was reported that HTC's latest flagship smartphone, the One (M8), is receiving a firmware update with multiple stability fixes. It has been noted that the firmware update for HTC One (M8) is 70MB in size and is available OTA (over-the-air).