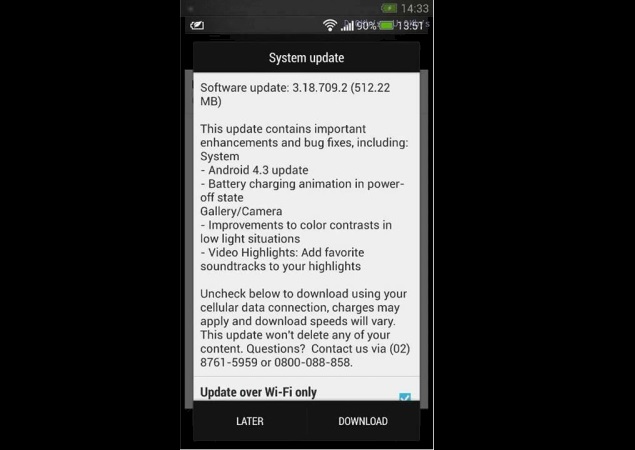 While we have not heard any official word from HTC about the Android 4.3 update to the HTC One, it seems the company has started the rollout in its home-turf, according to reports.

@LlabTooFeR, who claims to be a ROM developer, has posted an image of the screenshot of the Android 4.3 update for the HTC One on Twitter. The tweet mentions, "HTC One in Taiwan just started getting Android 4.3."

The latest Android 4.3 Jelly Bean update for the HTC's flagship smartphone looks to be available over the air (OTA). The screenshot reveals the software build number to be 3.18.709.2 and is about 512MB. The tweet also mentions that the update brings bug fixes and enhancements for the HTC One which majorly include battery charging animation in power-off state, improvements in gallery and camera department with upgrade to colour contrasts in low-light situations and adding soundtracks to highlights. However, the official change log has not been revealed, yet.

It was also rumoured that with Android 4.3 update, the HTC One would also receive the new Sense 5.5 UI, however there's been no mention of this with the currently reported update.

Last month, a tweet by HTC's president of global sales, Jason Mackenzie confirmed that the Android 4.3 update would be rolled out to the HTC One in US and Canada by the end of September. HTC's 2013 flagship smartphone was released in February and natively ran Android 4.1 Jelly Bean with Sense 5 UI out of the box. Despite the company announcing an update for the One to Android 4.2.2 in Asia and European markets, the update has not been rolled out across the globe.

For those unaware, the HTC One comes with a 4.7-inch full-HD display with 468 pixels per inch packed in an aluminium unibody. It is powered by a 1.7GHz quad-core Qualcomm Snapdragon 600 processor alongside 2GB of RAM. HTC One comes with 32GB and 64GB storage options, but without expandable storage. Connectivity options include Wi-Fi 802.11 a/ac/b/g/n, Bluetooth 4.0, GPS, NFC, Infrared and Micro-USB.