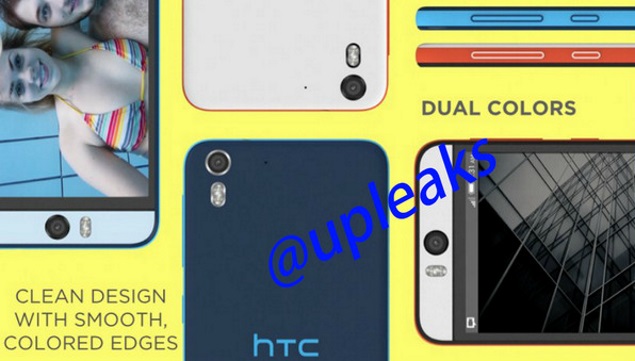 HTC's 'Double Exposure' event on Wednesday is likely to see the debut of the rumoured HTC One (M8 Eye) alongside a rugged GoPro-like RECamera. However, spilling the beans ahead of the official event tipster @upleaks has leaked some specifications of the rumoured Desire Eye smartphone alongside images of the handset.

One of the biggest highlights of the alleged HTC Desire Eye smartphone is the 13-megapixel front-facing camera boasting wide angle and an f/2.0 aperture.

One of the leaked images of the alleged Desire Eye smartphone appears to be from the company's marketing material, and shows the front and back panels of the yet-to-be-announced handset both sporting dual-LED flash. If the rumours are to be believed, the alleged Desire Eye smartphone can be considered to be the company's latest attempt to cash-in on the growing 'selfie' trend.

The images also indicate the Desire Eye will feature a dual-colour look, with a caption reading "clean design, with smooth coloured edges."

Some of the other specifications tipped include a 5.2-inch full-HD display; quad-core Snapdragon 801 clocked at 2.3GHz; 2GB of RAM; 32GB inbuilt storage; 2400mAh removable battery; IPX7 certification (water resistance); as well as 13-megapixel cameras on both the front and rear, both accompanied by dual-LED flash. The alleged Desire Eye smartphone is also said to come with Sense 6 UI running on top of Android OS.

Most of these rumoured specifications go in-line with previous leaked ones for the HTC One (M8 Eye), and so may just be referring to the same phone. Additionally, the phone tipster claims that other HTC high-end smartphones - HTC One, One mini, One (M8), One mini 2, One (E8) and One Max - will also receive selfie specialised functions with the upcoming Android L update.

Recently, HTC's much-touted "something remarkable" rugged waterproof camera dubbed RECamera was claimed to have been revealed in images along with other information. The Taiwanese giant in a tweet from an all new RECamera Twitter account further cemented the fact that a camera-like device will be revealed at HTC's 'Double Exposure' media event on October 8 in New York.