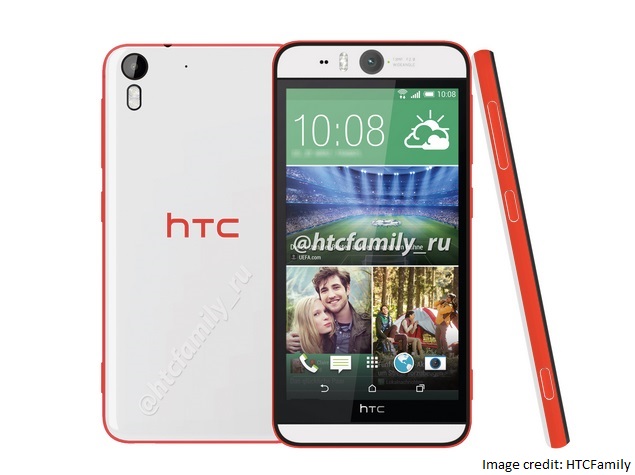 HTC seems all set for the 'Double Exposure' event scheduled for Wednesday October 8, with the release of a teaser via Twitter on Monday. Meanwhile the anticipated One (M8 Eye) smartphone and the HTC Desire Eye have also made an appearance on Indian import/ export website Zauba, whilst the Desire Eye has also been leaked in images.

The teaser by HTC USA on Monday is a gif image that reveals the back of the One (M8) or the anticipated One (M8 Eye) changing angles along with the event date in numbers. The accompanying message reads, "Don't adjust your screen. Just focus on the date." Apart from the 2 selfie-focused smartphones, HTC is also expected to launch its already-teased GoPro-like RECamera at the event.

On the other hand, both the anticipated smartphones, the One (M8 Eye) and the selfie-focused Desire Eye have been listed on Indian import/ export website Zauba (via Phonearena) along with the purported import price of each unit - the HTC One (M8 Eye) is listed at Rs. 27,035 and Desire Eye is Rs. 21,490. Notably, the import/ export website price listings are only the declared values for customs purposes, and usually are not accurate reflections of actual market price.

The anticipated Desire Eye, which was leaked in a render image along with the specifications on Friday, has again made an appearance in other render image (see above) by a Russian tech blog HTCFamily (via 9to5google). The alleged smartphone appears to follow the same design pattern as HTC's recently launched Desire 820.

The leaked Desire Eye image once again showcases the 13-megapixel front-facing camera with an f/2.0 wide-angle lens, and dual-LED flash for both front and rear cameras, as seen with the previous leak. Also visible in the leaked image is the announced launch date - October 8 - represented in the smartphone's clock as "10:08".

The previously tipped specifications for the HTC Desire Eye by @upleaks had included a 5.2-inch full-HD display; quad-core Snapdragon 801 clocked at 2.3GHz; 2GB of RAM; 32GB inbuilt storage; 2400mAh removable battery; IPX7 certification (water resistance); as well as 13-megapixel cameras on both the front and rear, both accompanied by dual-LED flash. The alleged Desire Eye smartphone is also said to come with Sense 6 UI running on top of latest Android OS.

Reportedly, the anticipated One (M8 Eye) will also feature a 13-megapixel camera with a depth sensing camera as on HTC One (M8), and Android 4.4.4 KitKat out-of-the-box paired with the latest Sense 6.0 UI.
Comments