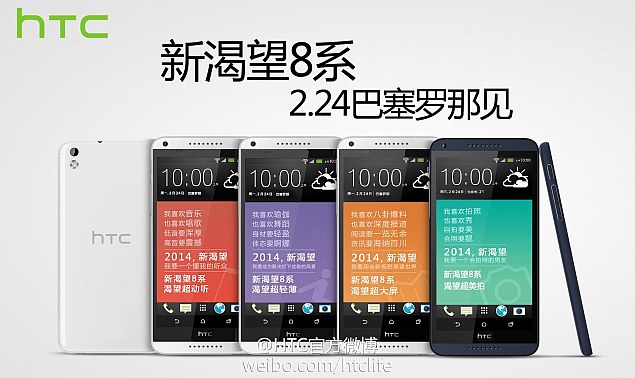 HTC Desire 8 has yet again entered the spotlight, right before the onset of Mobile World Congress 2014 event in Barcelona. The Taiwanese company has showcased the phone in press renders on its social media account.

The latest images of HTC Desire 8 have been posted on the company's Sina Weibo page, and reveal the handset in Blue and White colour variants.

The HTC Desire 8, said to be codenamed HTC A5, will reportedly be powered by a Qualcomm MSM8928 quad-core processor clocked at 1.6GHz, paired with 1.5GB of RAM. Other features include a Super LCD 2 5.5-inch 720p resolution display (roughly calculates up to 267 ppi), 8GB of built-in storage along with the expansion option, 13-megapixel rear and 5-megapixel front-facing shooter and the new Sense 6.0 UI.

HTC Desire 8 would also be sporting the firm's native BoomSound functionality, and would come in Black, White, Red, Yellow and Purple colour variants. 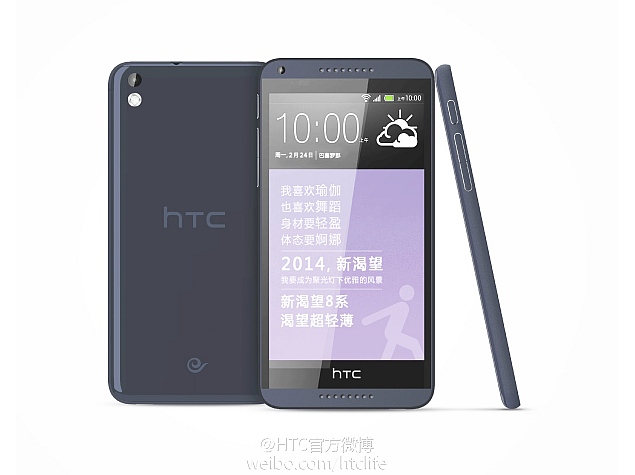 Earlier this week, HTC confirmed its Desire 8 handset via its Sina Weibo account.

The HTC post from Weibo showcases a Desire 8 screenshot, and clearly indicates the lack of extravagant marketing budget. The second image, however, shows the Sense UI highlighting the date and time - 10am, 24 February, the commencing date for the Mobile World Congress event scheduled to take place in Barcelona.

The Taiwanese firm will be skipping the upcoming Mobile World Congress 2014 event, scheduled to start in Barcelona from 24 February, and will instead be holding an event on in London and New York on 25 March 2014.